Covid: “Many of those who enter infected are not vaccinated and ask for a dose, but it is too late” 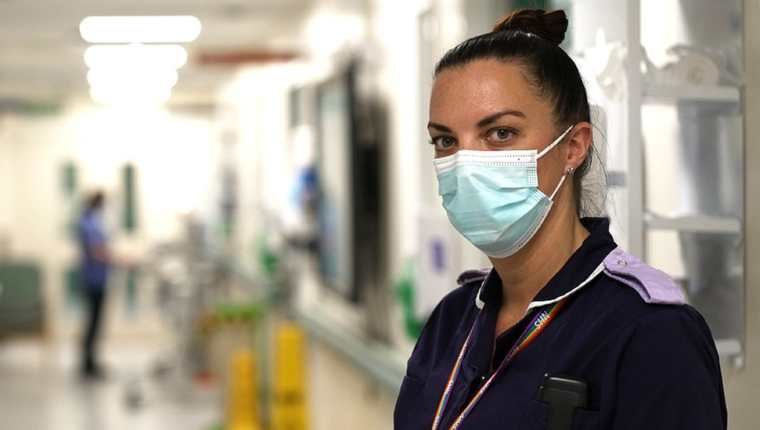 At the Royal Victoria Infirmary (RVI) in Newcastle there are dozens of patients waiting for care in the corridors with heart attacks, fractures, common colds and of course, Covid-19.

This was confirmed by the BBC journalist Jim Reed, who visited the health center on the night of December 2 and the morning of December 3.

The head nurse Jenny Cain He entered the RVI 17 years ago as a practitioner. For most of the pandemic, she was responsible for one of the hospital’s covid wards, despite the fact that her husband is clinically vulnerable and awaiting an organ transplant.

To avoid complications, they decided to divide the family home in half and keep their distance for months.

“There were many deaths in the covid rooms, it was emotionally exhausting,” he says, acknowledging that the staff is “very tired”.

“The adrenaline kept us going for a long time and then when it calmed down, the whole world was down.”

Although the number of patients with the virus in the RVI under from 70 to 40 in the last monthThanks to the “enormous difference” that the booster vaccines are beginning to make, Jenny recognizes that many of those admitted are not vaccinated and often ask for a dose to be applied. “When it is too late”.

This December 12, the British health authorities will raise the alert level from three to four for the spread of the omicron variant of the coronavirus.

“Now it is clear that two doses of the vaccine are simply not enough to provide the level of protection that we all need. But the good news is that our scientists are confident that with a third dose, a booster dose, we will all be able to increase our level of protection again, ”he said.

The current situation worries health personnel because it is beyond the virus.

“It’s not ideal,” says Dr. Jim Connelly, a medical specialist who runs the emergency department. “Nobody wants patients to be treated in a hallway”he adds.

The outlook is much more difficult this boreal winter. Hospital performance in England is at its worst on record, with waiting times between three and 13 hours in the ER, something never seen before.

“In recent months, the volume [de pacientes] It has been greater than ever ”, says the doctor, who acknowledges that although the staff“ wants to give the best they can, sometimes it is not possible because the volume is too large ”.

The delay in the care of older adults and patients with serious illnesses during quarantines, has generated an accumulation of pending appointments for surgical interventions and vital treatments.

These days in the RVI the bed occupancy this about 90%.

That’s why Jenny can’t stop talking on the phone – she’s trying to find beds for patients, resolve staffing issues, and free up space for those still waiting in the ER to be moved to a ward.

If staff are asked how they feel, words such as tired, exhausted, burned out. However, after nearly two years of the pandemic, there remains a sense of determination and resilience, even in the face of the imminent threat of another wave of covid.

“It has been a real emotional roller coaster“Reiterates Nurse Jenny.

“There has been everything: pride and reward, disgust and fatigue. But the teamwork and staff have been fantastic. Fantastic. I would not go anywhere else. “