The pressure is generalized today: in the Ministry of Health, in the isolation and quarantine system administered and in thousands of workers who are under the mandate of the vaccine but who have not been immunized with just a few days. 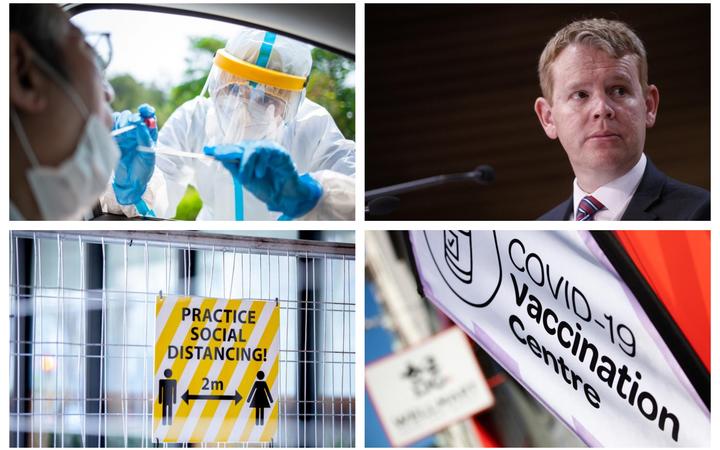 The saliva testing program has faced criticism today, Covid-19 Response Minister Chris Hipkins has spoken of the challenges facing MIQ, where staff report an increase in abuse and there are only days left before the deadline. of the vaccine mandate.
Photo: 123RF / RNZ

We’ll talk about all of that soon, but first, let’s get rid of the daily figures.

185 new community cases of Covid-19 were reported today, including 25 in Waikato and eight in Northland.

There are 81 cases in the hospital, and it is worth noting that more than half of them are not vaccinated.

While we are on the issue of not being vaccinated, leaked data from midwives shows that hundreds of pregnant people in Te Tai Tokerau (Northland) have not been immunized.

With no government news on the coronavirus today, and no other major announcements related to the Covid-19 response, let’s delve into the rest of the day’s developments – there are still plenty.

We just mentioned that hundreds of pregnant Northerners are not vaccinated, but firefighters also face a vaccination problem.

The professional firefighters union warns that there will not be enough teams left for the calls when the Covid-19 vaccine mandate begins next week.

Fire and Emergency requires 13,000 employees or volunteers to be vaccinated to do their job after the November 15 deadline.

The union estimates that this can keep 10 percent out of the front line, from both car accidents and fires.

“This is the crisis as of midnight on the 15th,” said the union’s national secretary, Wattie Watson.

“Fenz, in our opinion, will not be able to maintain the current level of response due to the number of firefighters, both professional and volunteer, who are not vaccinated or their vaccination status is unknown.”

A critical moment is also approaching for other sectors, with the vaccination mandate deadline set for November 15, early next week.

For example, around 4,000 district health board workers have yet to be vaccinated, just days before the no jab no work deadline.

On a different note related to vaccinations, the Whānau Ora Commissioning Agency (WOCA) will return to court to try again to obtain data from the Ministry of Health on unvaccinated Maori.

The agency has had its request for information, to create a better display for Maori, rejected by the ministry for privacy reasons.

The latest rejection followed a High Court ruling that the ministry must reconsider its refusal to release the data in light of its obligations to Te Tiriti or Waitangi.

And in more vaccine news, views on the mandate have resulted in the resignation of a DHB member following an email he sent to the Countdown supermarket, criticizing his proposed vaccine mandate.

The email was set up to seek staff comment on a proposal to require all grocer employees to be vaccinated in mid-January.

Ilka Beekhuis had written to Countdown, identifying herself as a “publicly elected official of the Southern DHB.”

In a statement released this afternoon, he said it was a personal decision to resign and that he will not comment further.

After reports that MIQ staff are facing increasing violence, government ministers say the system is under pressure and the next shift to shorter stays will be a critical point.

Covid-19 Response Minister Chris Hipkins said today that MIQ had been a challenging concept early on for some of those who got involved with it.

“Certainly there are people at MIQ who don’t want to be there, whether they come internationally or come from the community, and that puts the people who work there under a lot of pressure.”

He acknowledged that the pressures on MIQ were only adding to the Delta outbreak.

“We found at MIQ that those who are being quarantined from the community often on short notice and without much time to … prepare psychologically find it to be a difficult change, so we find it to be a more challenging cohort to deal with. Now, I don’t want to make full generalizations there because there are people who are very grateful for the opportunity to join MIQ as well. “

He said the home isolation system had been established “very quickly”, which had put further pressure on the system.

Hipkins said MIQ was also preparing for the switch to seven-day isolation for inbound travelers, which was also increasing pressure on the system.

After that update, MIQ hotel staff are told not to walk alone, and to hire security escorts to visit certain guests, due to an increased risk of violence.

Their unions say they are being attacked and abused via hotel phones.

A health and safety report presented to the Manukau DHB counties board yesterday noted that MIQ hotels were home to a higher rate of people with substance dependence and other social problems, as more community cases of Covid-19 were put on the spot. quarantine.

He said that now there are fewer health personnel supporting them, as resources drawn from health boards across the country in September are returned to their own areas of work.

The rest reported more violence and aggression by the guests.

The Auditor General points to the Ministry of Health

The MIQ system is not the only thing under pressure.

Auditor General John Ryan has criticized the Health Ministry for failing to address potential conflicts of interest in its handling of the $ 50 million Covid-19 saliva testing contract, which was approved without a proper procurement process.

In news this afternoon, Ryan said inquiries from his office revealed that there was no procurement plan or independent audit before the contract was awarded to Asia Pacific Healthcare Group in May.

Four of the five panelists indicated potential conflicts of interest, including past and current employment relationships with organizations bidding for the contract.

He acknowledged that a procurement plan was not always required and, in this case, the ministry considered that “the acquisition was urgent.”

“However, we would have expected a procurement plan to be prepared for a contract worth more than $ 50 million and for a major issue like this,” he wrote.

Mixed reaction to the school’s decision

The government’s decision to allow 200,000 Auckland children to return to school next week for the first time in three months has sparked a mixture of joy, relief and concern.

Delight from children in the 0-10 years who cannot wait to return to class, relief from parents exhausted by weeks of learning at home, and a degree of concern from both groups for change.

Meanwhile, teachers and principals in alert level 3 areas now have to find out how they can reopen within the parameters set by the Ministry of Education.

Rules include keeping children in separate, stable groups that do not mix, using physical distancing when practical, and requiring face masks indoors for children Year 4 and up.

The rules apply to all schools in Level 3 regions, which currently include parts of Waikato, and most schools are expected to check-in children at home on some days or allow staggered attendance.

Tamaki back in the line of fire

An iwi from whom Brian Tamaki is descended calls to tell him that he is putting Maori communities at risk.

follows mass protests across the country Tuesday organized by a Tamaki-created freedom group that opposes vaccines and lockdown restrictions.

Te Rūnanganui or Ngāti Hikairo, located between Kāwhia and Te Awamutu, were especially concerned about the number of young children participating in the rallies.

They said that Tāmaki, who was one of their own, was calling on Maori communities to undermine science, putting their people at risk.

Now they have asked the leader of the Destiny Church to take a whānau-first approach.