Millions of dollars in cocaine were seized and eight people were arrested after a major drug operation in Canterbury. 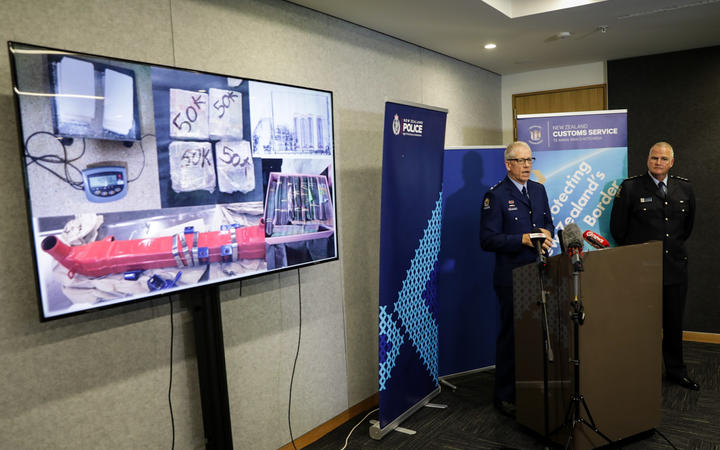 Millions of dollars worth of cocaine were seized in the operation.
Photo: RNZ / Nathan Mckinnon

The director of Operation Mist’s National Organized Crime Group, Detective Superintendent Greg Williams, told the media this afternoon that around 50 kg of cocaine have so far been seized here in New Zealand or in overseas ports.

The media standoff comes after seven search warrants were executed in Canterbury yesterday, resulting in eight arrests, including six Colombian citizens and one Argentine citizen. Another person in Auckland was arrested.

A 34-year-old man and a 38-year-old woman appeared in Christchurch District Court yesterday. Four people have appeared in court this morning.

Two more people have been charged and are due to appear today.

The charges range from money laundering to importation, supplying and attempting to import a Class A drug and participation in an organized criminal group.

Look at the police standing here:

He said the arrests were the result of a 10-month investigation into the importation, supply and sale of cocaine here in New Zealand and crimes related to money laundering.

“The joint investigation between the New Zealand Police and New Zealand Customs involved some 70 staff members from several different teams, including the South Island Customs investigation team, the National Crime Group, the Recovery team of Assets and the High Technology Crimes Group, supported by our international customs and police liaison network. These teams worked together with the Anti-Drug Administration (DEA), the National Police of Colombia, the Customs Service of Spain and the Service of Cook Islands Customs “.

He thanked the DEA in particular for providing resources in the case, as well as the Colombian police for helping to identify those who facilitated the drug supply to New Zealand.

Williams said the operation had dealt a major blow to the criminal group involved, as well as to the supply of cocaine to New Zealand.

“What we know from the sewage analysis is that cocaine use in New Zealand is relatively low … So we argue that this particular group was one of the major suppliers of cocaine in this country,” he said.

The only thing about the operation was that police were able to identify drug supply chains from Colombian networks to New Zealand, as well as the flow of money from New Zealand to the United States, he said.

He said that upon completion of the operation, police had so far seized $ 300,000 in cash, two ounces of cocaine, and several Crypto wallets, one of which contained around $ 70,000.

“We know that at this stage this group has laundered around $ 600,000 and there are associated fees related to that.”

Williams described those involved as “a group of oil wells” capable of bringing their pharmaceutical products to distribution networks in the country and getting the money out as quickly as possible.

Transnational groups like this one were targeting countries like New Zealand, as well as Japan, Taiwan, Australia and South Korea because of the high prices paid for illicit drugs compared to other countries, he said.

“To maximize their profits, what they are doing is inserting their own people into New Zealand. These people are setting up the import mechanism and supply lines in local gangs and organized crime,” he said. Williams said they were transnational organized gang cells.