Dr. Jonathan Jarman, a medical health officer for the Taranaki District Board of Health, says that the Covid-19 case group in Stratford was very reluctant to get tested and had not been using the tracking app. 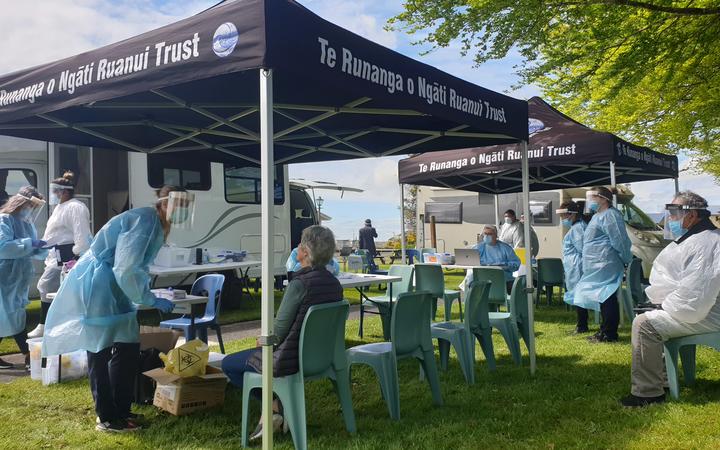 A pop-up vaccination clinic in Stratford run by Te Runanga or Ngāti Ruanui after Covid-19 was detected in sewage.
Photo: RNZ / Robin Martin

The Health Ministry reported last night that six people tested positive for Covid-19 in Stratford and one was in hospital, but all six cases are related and there is a clear link to the Auckland outbreak.

He said there are three adults and three children and two of the group had been to Auckland at the end of last month.

Jarman said the children have not been to school or preschool during their infectious period.

Maori Party co-leader Debbie Ngarewa-Packer said the Taranaki District Health Board should have been more cautious, after Covid-19 repeatedly appeared in Stratford sewage.

“You know, I think there has been a sense of complacency at DHB … there is a general sense in the community that it is moving too slow.”

But Jarman disagreed, saying that after positive sewage tests in the region, 2,284 tests have been conducted since last Friday.

“It was a disease detective job, we found the group of people who were actually very reluctant to get tested.”

Jarman said they eventually realized it was a serious illness.

“One of the people involved with this group said it was the sickest they had ever been and I think then the penny fell and they agreed to get tested.”

Jarman said the whole group has been upset with varying levels of illness.

He said the group has been keeping to themselves, which is positive from a public health point of view, but they haven’t been using the contact tracker app.

Jarman said there may be some places of interest in the Stratford area.

“But what I would say is that all of Stratford should consider itself as a place of interest and that if someone has symptoms and needs to be tested, we should fix it as soon as possible.”

Jarman said there are likely more cases and that if people are not vaccinated yet, they should seriously think about it now.

He said health officials are optimistic they could control the outbreak, but will not know until they have finished tracing the contacts.

“We know it has come from Auckland, it is just looking at the extent of the spread in the community, I am cautiously optimistic that we can contain it.”

Stratford Mayor Neil Volzke said today’s focus would be on tracing contacts in the Stratford area and ensuring there are adequate facilities for people to get tested.

“If they are in doubt, feel unwell, or have flu-like symptoms, we want those people to get tested.”

Seventy-three percent of the eligible Taranaki population is fully vaccinated, while the Maori rate is 53 percent.

Volzke said the region still has a way to go and encouraged anyone who has been waiting to get vaccinated.