New Zealand does not need to hear a call from the UN to increase carbon emissions targets for next year, says Climate Minister James Shaw. 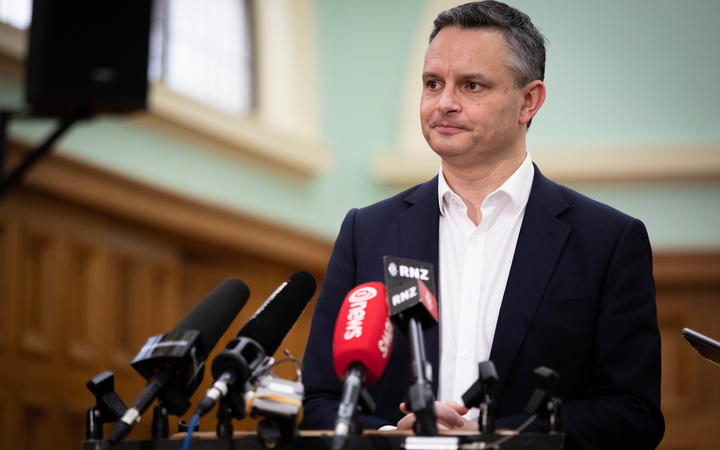 The United Nations has released a seven-page document, urging nations at the COP26 climate summit in Glasgow to review and strengthen their emissions targets for 2030 by next year. It also requests an agreement for the total elimination of coal.

Scientists have warned that keeping the temperature rising to 1.5 ° C, beyond which the worst impacts of climate change will be unleashed, requires global emissions to be reduced by 45 percent by 2030 and to zero overall by 2050.

With the world out of the way to meet the target, the draft document urges countries to “review and strengthen” emission reduction targets by 2030 in their national plans to align them with the Paris Agreement target from far ahead. below 2 ° C or 1.5 ° C for last. of 2022.

As it stands, the world is on track to reach 2.4 ° C above pre-industrial levels despite commitments made at COP26.

Shaw said Morning report Section 30 of the document requesting that the country return with better goals for next year does not apply to New Zealand.

He said that New Zealand had already improved its targets just before the COP26 call and argued that the government’s current target was realistic.

Shaw added that the document encouraged countries to review their targets “but that does not mean it is necessary.” Section 30 was specifically directed at certain countries with inadequate targets, he said.

“There are some countries, including the largest issuers, that did not update their commitments and therefore that text is really directed at those countries.”

While New Zealand’s target of 41 percent has been criticized for being too low, Shaw insisted that the Cabinet had listened to government officials who advised that setting a higher target would be unattainable with current agreements.

“The cabinet has come to a position that says we believe that is as much as we believe it to be credible at the moment. If we were to increase our target, and no one says we don’t want to, the options at this stage to do so are not credible,” said.

He would not use his ministerial mandate to sign higher goals against cabinet consensus, he said.

“We did a lot of analysis that brought us to the level we are at and, in fact, we said in the Cabinet decision that we know that we must constantly strive to do more based on an analysis of what we think we can do.”

The document also calls on countries to accelerate the phase-out of coal and fossil fuel subsidies, but has no firm dates or targets on this issue.

Shaw said it was a big question and there might be pushback from some world leaders, but he felt momentum was building and was optimistic that the goals could be achieved.

“I suspect that no one is going to be very happy about that, just because of the nature of the tensions here,” he said.

“But having said that, I think there is more momentum and a more positive sense of progress here than in the previous two events I’ve been to.”

“I’m not very hopeful about that because there are several coal-producing countries that are holding out, but I guess we’ll have to wait and see.”

Shaw said he was concerned about the integrity of those commercial carbon credit credits, used by the country to offset national failure to meet emissions targets.

He acknowledged that the mechanisms of the 1997 Kyoto Protocol agreement in this regard resulted in “some terrible things.”

“We got the pushback from that. We can’t allow those mistakes to be repeated,” he said.

Shaw said that no deal on the nature of carbon credit trading would be better than a bad deal, and that New Zealand already had the ability to form deals with other countries independently.

There was no possibility of a deal restricting New Zealand from offsetting offshore carbon targets and the government would work with nations in the Asia-Pacific region to aid sustainability, he added.

“It is probably the most difficult part of the whole set of negotiations and a lot of what is happening in other parts of the negotiations depends on reaching some kind of satisfactory result in that area,” he said.

“We have some very strong concerns about human rights, indigenous rights and the environmental integrity of that system. We have said that we want an outcome, but we have also said no at any cost. I have repeatedly said that no agreement is better than a bad deal when it comes to that.

“We are already capable of forming agreements to reduce global emissions with other countries. We can do it bilaterally or plurilaterally. Where things are really difficult is in trying to establish a kind of global operating system …”

“We can form agreements with other countries anyway and when the Cabinet made the decision to increase our objective, we said that our main priority was national investment for our transition to the local level.”

Loss and damage have been included in the draft document. Calls for more support from developed countries and other organizations to address the damage caused by extreme weather and rising sea levels in vulnerable nations.

It also recognizes that more funding is needed for developing countries beyond the $ 100 billion a year long promised by 2020, which will not be delivered until at least 2022.

A group of law students filed a lawsuit in Wellington High Court against Energy Minister Megan Woods for her decision to award two new onshore oil and gas exploration.

The Students for Climate Solutions group claims that Woods’ decision in June to issue exploration permits in the Taranaki area is inconsistent with the government’s legal obligations under the country’s Zero Carbon Law and the Paris-state agreement. climate emergency.

“There is an increase in New Zealand and around the world in climate-related litigation,” he said.

“In fact, I think it’s healthy for that to happen and for citizens to go to court and continually test their government’s performance on climate change, and I don’t think New Zealand is and shouldn’t be an exception to that.”

Woods earlier in the year had indicated that more onshore exploration permits could be granted next year, allowing for oil and gas exploration until 2032.