In these blackout times, many of us look to news alternatives. 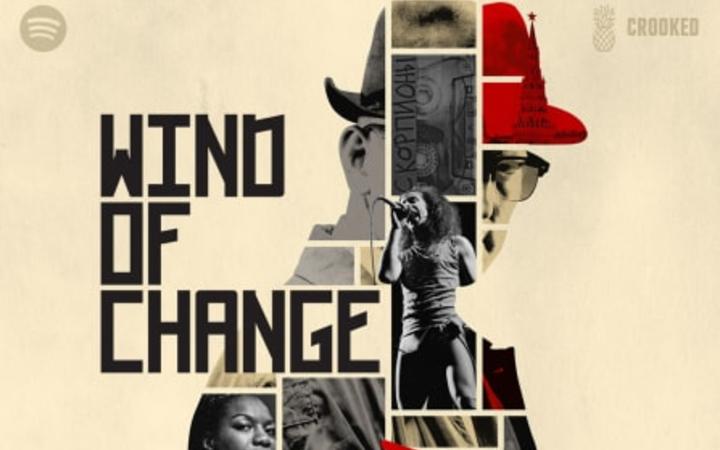 The ‘Wind of Change’ podcast follows New York writer Patrick Radden Keefe as he investigates the origins of the powerful ’80s ballad of the same name.
Photo: crooked.com

Following our six great music podcasts from last year, here are some of my new favorite music-related podcasts:

For those of you who love investigations, crime, the CIA, and a classic powerful ballad from the ’80s, you will love this eight-episode podcast.

For more than 10 years, New York writer Patrick Radden Keefe has been investigating a rumor he heard about the classic 80s power ballad. Winds of change – that the German gang Scorpions did not actually write it, but the CIA.

The song in question is so familiar, you will know, and its release became the soundtrack to the peaceful revolution that swept through Europe in the 1980s. According to some fans, it is the song that ended the Cold War.

Listen to learn about the spies who do the unthinkable, government secrets, and the propaganda hidden in this popular song.

Listen to Wind of Change here

Answer all: the case of the missed coup

Have you ever had a song stuck in your head but you don’t know where it came from?

This podcast follows a California man who is haunted by the memory of a pop song from his youth. To ease the anxiety of not being able to find it anywhere on the internet, dig deep and go on a journey of discovery.

It is very well done and less than an hour to listen to it.

Click here to listen to The Case of the Missing Coup

British musician Jessie Ware had a reality check when she performed at Coachella – being a pop star didn’t allow her to connect on a deeper level with other people. So he took a break and started this podcast with his mother.

Table Manners invites guests to Ware’s house to chat and eat a meal that she and / or her mother have prepared.

If you’re a fan of synthesizers or the music of French composer, performer, and producer Jean-Michel Jarre, this is a must-listen.

Jarre is interviewed by English actor, comedian, musician and writer Matt Berry and their mutual respect and way of speaking makes it easy to listen.

They discuss the roots of Jarre’s career, his early explorations into the then-novel genre of electronic music, and the instruments and tools he used to create his groundbreaking album. oxygen.

I love well-produced podcasts, and this one definitely uses soundscapes effectively to play with your ears.

The Pantograph Punch – Artist in Residence

Artist in residence is a series made in collaboration with The Pantograph Punch, which asked 10 New Zealand artists working in theater, music, poetry, and dance to create a custom 15-minute performance during the 2020 Covid-19 national shutdown.

Each artist was asked to do something to help with an aspect of life in isolation that listeners might be struggling with.

The musical artists who contributed are Bic Runga, Ruby Solly, and Coco Solid.

Hear from The Pantograph Punch artist in residence here

Each episode investigates the world’s most recognizable and interesting sounds: the sound at the end of the washing machine cycle (who decides the tone?), Minecraft music, and themes from shows like Seinfield, or the story behind famous jingles like “I’m Lovin ‘It” by McDonald’s.

Other episodes explore topics such as Foley artists’ work in film and synesthesia. Listen to this podcast and you will never again be able to hear the fanfare that presents every 20th Century Fox movie in the same way.

Who is Daniel Johns?

Fans of The Big Day Out podcast can enjoy this as it takes us back to the grunge music era of the 90s, and delves into the world of Australian band Silverchair, the very quick impact they had on the world and how that sudden fame affected the leader of the band, Daniel Johns.

Johns does not like the media – and does not do interviews – but in this podcast he wants to do to tell his story. He speaks honestly, as well as sharing intimate interviews with his ex-wife Natalie Imbruglia and Billy Corgan of The Smashing Pumpkins.

Listen Who is Daniel Johns? here

If you are a person who passionately hates certain bands, or just wants to hear different (negative) versions of your favorite bands, this podcast is for you.

In each episode, the two hosts discuss their most hated bands and explain why others should also dislike artists like Frank Sinatra, Destiny’s Child, Beck, Pearl Jam, Joy Division, The Replacements, The Shins, Justin Beiber, and more.

A word of caution though: as the passion builds up in the conversation, there are some swear words involved.

This podcast, produced by Classic FM in the UK, is for kids … and adults who love David Walliams like me!

Each episode is under 20 minutes long (perfect for kids’ attention span) and the podcasts themselves are fun, educational, and daring. Like the Walliams books.

Once you or your children have listened to the podcasts, you can test your knowledge with the supplied quizzes.

Disgraceland is a very American-sounding podcast about famous musicians who misbehave.

The thirty-minute episodes trace the craziest crime stories pop stars are involved in: Did Jerry Lee Lewis get away with murdering his fifth wife? How did Sid Vicious and Sam Cooke really die?

One slightly annoying thing for me about this podcast is the way it embellishes the stories, but Disgraceland is not journalism, it is entertainment, inspired by real events.

An hour of conversation and musical selections from some of New Zealand’s best-known people, including comedian Thomas Sainsbury, chef Al Brown, and actress Madeleine Sami.

Tony Stamp reviews the latest albums both from here and abroad.

And many of our great artist interviews can be found on Music 101.