The real estate market share of early homebuyers has reached a record, but it remains to be seen if the momentum can be sustained.

A new report from real estate research firm Core Logic shows that first-time home buyers accounted for 26.4 percent of the housing market in the three months ending in September, up from 21.5 percent the previous quarter.

The long-term average is 21.8 percent and the previous benchmark, established in the third quarter of 2020, was 25.6 percent.

During the same three-month period, the median home price in New Zealand increased nearly 5 percent to $ 950,229.

CoreLogic Chief Property Economist Kelvin Davidson said extra care was needed in interpreting the figures because the number of transactions completed during the quarter had been disrupted by the reimposition of lockdown restrictions, resulting in a size smaller sample size. 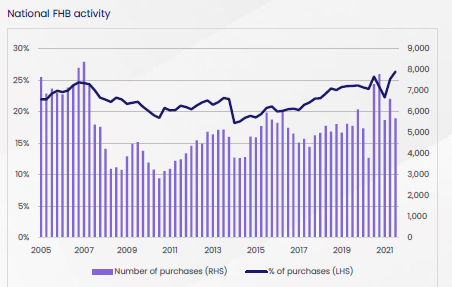 “However, it is safe to say that FHBs are very active in the market,” he said.

“[First home buyers] they were seizing the opportunity to enter the market, capitalizing on strong financial incentives to buy rather than rent, filling the void left by a decline in market share for mortgaged investors who faced tougher conditions due to tighter credit constraints. “

The share of purchases they made was unexpectedly strong, given that house prices had risen more than 27 percent in the past 12 months, he said.

New buyers were increasingly turning to their KiwiSaver and “mom and dad’s bank” to make a deposit, Davidson said, and they were also making concessions on property type and location to enter the market.

Independent properties accounted for 72 percent of all new homebuyer purchases in the third quarter, up from 78 percent a year ago. The share of flats, defined as townhouses and shared wall properties, increased to 18 percent, compared to 14 percent in 2020.

Davidson said it would be interesting to see if the first homebuyer market could hold at similar levels in the coming quarters, given that the new loan limits would affect the ability of new buyers to save a deposit.

“The average time to hold a deposit is now more than 10.5 years, up from less than nine a year ago, and well above the long-term average of about eight years.”

Buying a home with a deposit below the standard 20 percent had been popular with FHBs, Davidson said.

“However, since the allocation of banks to advance low-deposit loans to owner occupiers was recently cut in half from 20 percent of loan flows to 10, it is no longer an option for many.”

Furthermore, interest rates were expected to increase gradually over the next 12 months as the Reserve Bank sought to hedge against inflationary pressures.

This would add pressure to the cost of servicing a mortgage for first-time home buyers, Davidson said.

First-time home buyers were the most prominent in the Wellington market, accounting for 33 percent of all transactions in the past three months, compared to their long-term average of 29 percent.

Dunedin posted the most pronounced growth, with new buyers accounting for 30 percent of all transactions, eight points above its 22 percent average.

CoreLogic data showed that first-time property owners in Auckland paid slightly less than the rest of the market, with first-time home buyers paying an average of $ 900,500 compared to the city average of all buyers. of $ 1.05 million.

Christchurch was the cheapest of all the major centers, with early home buyers paying a median price of more than $ 500,000.