The Christchurch City Council is assuring residents that there is little risk of beaches being contaminated with untreated waste. 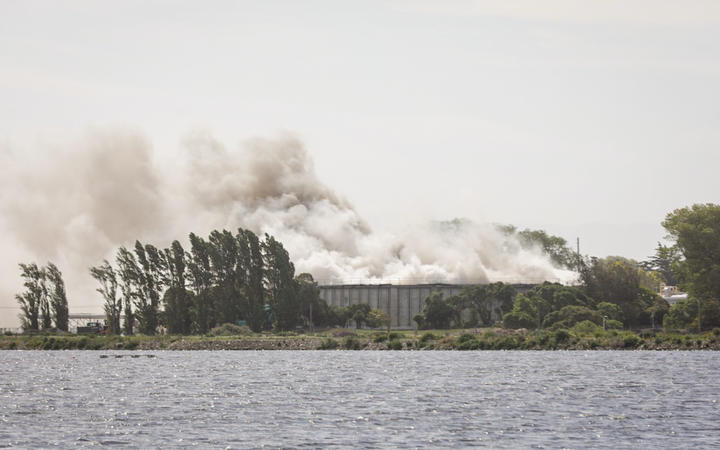 That’s despite a major fire at a sewage treatment plant east of the city.

Yesterday sent giant plumes of acrid and thick smoke into the air, which could be seen throughout the city, prompting a public health alert.

The fire broke out in the plant’s two huge filter tanks, crucial infrastructure for the city’s wastewater.

The council’s water chief, Helen Beaumont, said the trickling filters would be out of service for several months.

To ensure that the city’s toilets could continue to flush, alternative ways of dealing with its wastewater were now being investigated.

“We may or may not get the same level of treatment, but there are other things we can do. So we can add chemical flocculants, for example, to settling tanks and remove more of that organic material that way, or We could turn one of the oxidation ponds go to a different process. “

Beaumont said the treated sewage that ended up coming out of the outlet pipe nearly a mile out to sea may not be as clean as usual, and there is a possibility that the council will not abide by its resource consent.

This was allowed due to the emergency nature of the breach and was unlikely to lead to beach closures.

“We would expect to see some change. As we try different approaches and adapt processes, we will keep a close eye on suspended solids, biological oxygen demand, and dissolved oxygen. We will keep an eye out for what lies ahead. oxidation to get the best possible effluent at the other end. “

On Monday, the Canterbury District Board of Health warned the elderly, young children and people with lung or heart conditions to stay indoors to protect themselves from the smoke.

Even this morning residents were asked to keep their windows closed.

Rachael Robinson struggled to keep the smoke out of her weathered home and noticed the smell even with all the doors and windows closed.

“[It’s] very toxic, a kind of catch in the throat. Around 3.20 p.m. M. It’s when we noticed the sirens, but it was really very black, even coming over the house, you know, it just covered the sun and everything. “

By noon Tuesday, the fire was out, with a small team of firefighters buffering hot spots.

“When the roof collapsed, it actually sealed it a little bit, so we had a lot of work to get access, but the smoke and everything has gone down considerably.”

Berry said it had not yet been determined whether the contractors who were working on the roof when the fire broke out had anything to do with causing the hell.

The council’s Beaumont said it was too early to say how much it would cost to repair or how long it would take before the plant was back up and running at full capacity.