The race to vaccinate 90 percent of Aotearoa against Covid-19 is still underway, but people are being reminded that it is a marathon and not a sprint. 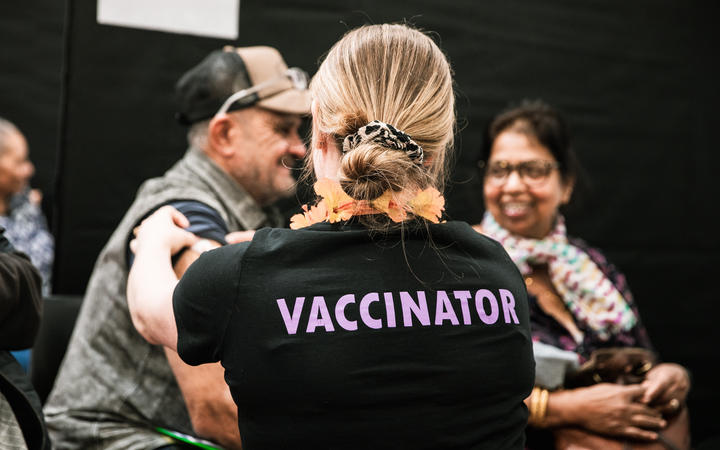 The counties Manukau District Board of Health is close to hitting the 90 percent first dose milestone, which would bring the entire Auckland region to the other side of the line. (File image)
Photo: RNZ / Samuel Rillstone

But others are tantalizingly close with only a few thousand strokes to go.

The Counties Manukau District Board of Health is on the final stretch to reach the 90 percent first dose milestone, just 3,951 injections away.

It is a goal that would bring the entire Auckland region to the other side of the line.

Their response is being overseen by the North Regional Health Coordination Center, a collective of Northland district health boards and the three in Auckland.

Clinical director Anthony Jordan said the vaccination effort would not stop at 90 percent.

“We are going to keep vaccinating people, regardless of what the goal is,” said Dr. Jordan.

“Our aspiration is to provide vaccination to protect all people in the population who need and want to be vaccinated.”

He said they had to explore why people didn’t always show up for the second dose or wait beyond the recommended window between doses.

“We want people to come back as soon as possible for their second dose.

“So anywhere after those 21 days, the three-week mark is an appropriate time to go back and get your fix.”

Canterbury crossed the 90 percent first hit milestone late last week, after more than 3,000 people rolled up their sleeves on the day the Covid-19 cases were reported in Christchurch.

Whānau Ora Community Clinic director George Ngatai said his Christchurch site has seen an increase in people getting tested and vaccinated since then, a sign of Covid-19 could quickly appear on your doorstep.

And those in the back of the herd kept advancing.

Tairāwhiti was the least vaccinated DHB, currently with 79 percent of the first doses.

But Cara-Lee Pewhairangi-Lawton of the local primary health organization Ngāti Porou Hauora was optimistic that Tairāwhiti could reach 90 percent in December.

“Everything can be achieved and I believe in our teams that are vaccinating.”

But Pewhairangi-Lawton thought it necessary to “try different approaches” to encourage people.

Taranaki had fallen away from being among the worst vaccination rates in the country, now at 84 percent for the first doses, after being criticized by government officials.

Taranaki DHB spokesperson Bevan Clayton-Smith was pleased but said there was still room for improvement and the DHB could not claim all the success.

He said that “working in partnership with our suppliers, going forward, is always the way to go.”

Clayton-Smith said the vaccination was “a team effort, a collaborative effort … it’s a Taranaki effort.”

The government said a new traffic light system to replace lockdown levels would only start when all DHBs in New Zealand had 90 percent of their eligible population vaccinated.