Yesterday’s Vaxathon Super Saturday official count was announced, while 51 new community cases were reported, including four in Waikato. Here is a summary of current Covid-19 developments. 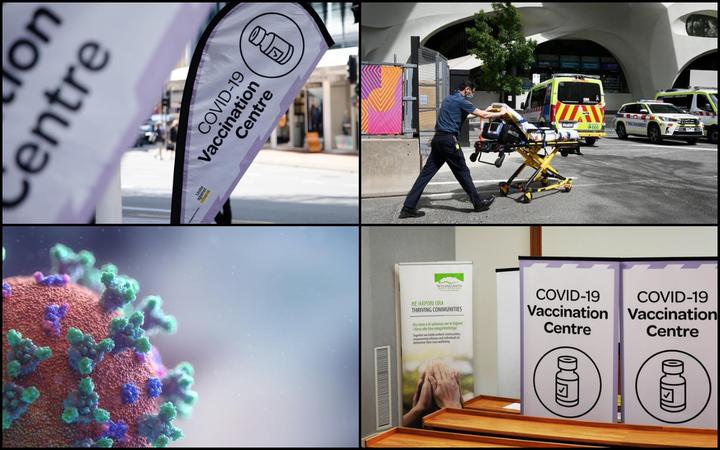 Clockwise from top left: 130,002 doses were administered yesterday during the Vaxathon; Restrictions in Victoria will be eased;
Photo: RNZ / AFP

Of the 51 new community cases, four are in Waikato, the Health Ministry said in a statement.

Two were linked to previous cases, while investigations are underway to determine whether there are links to the other two. One is in Hamilton and the other is in Kihikihi, and the ministry said it was possible that this case could be the source of the sewage detections in Te Awamutu.

There is also a home in Wellsford, north of Auckland, with cases, the ministry said. This follows two positive detections in the wastewater in the area. The ministry urged Wellsford residents to stay vigilant and get tested if they have any symptoms.

“People across the motu embraced Super Saturday as if the lives of their communities depended on it. It was inspiring to witness how we know that the Covid-19 vaccine is key to our efforts to control the virus.”

He said Auckland did “incredibly well” with 41,081 people vaccinated there yesterday, including 9,039 first doses and 32,042 second doses.

A big thank you to everyone who participated in Super Saturday yesterday. This is what we achieve together:

More needed to scale up vaccines

Professor Baker participated in the Vaxathon and said it was a fantastic day.

Baker received his second shot in East Porirua and said it was “a really positive atmosphere” that felt like a celebration.

Another epidemiologist, Rod Jackson, said the government must take a new approach to vaccinating those who have not yet received an injection.

He said those who doubt vaccines need to hear less from government frontmen and more from community leaders.

Donations are coming to a community mobile clinic to vaccinate the Tairawhiti region against Covid-19.

Trustee Ani Pahuru-Huriwai said the trust did not expect as much public support, and that the money would help it do “a really painstaking job” to vaccinate people in the region.

The Trust planned to launch a five-week campaign, going door-to-door with homes and then vaccinating people at community events during the summer.

The shutdown in Melbourne and parts of the Victoria region will be lifted starting at 11:59 p.m. Thursday (local time) when the state is expected to reach its goal of having 70 percent of those 16 and older fully vaccinated. .

Soon, more than 90 percent of Victorians age 16 and older will have received at least one dose of vaccine.

Across the state, individuals will be able to have 10 visitors in their home each day, including dependents.

Other changes include lifting the curfew and 15 km travel radius restrictions and allowing all children of fully vaccinated adults to attend daycare.

New South Wales recorded 301 new community cases and 10 deaths in the 24 hours to 8pm on Saturday.