A group of Chinese migrant workers helping authorities investigate an illegal migrant scheme is disheartened at being excluded from the new single residency offer. 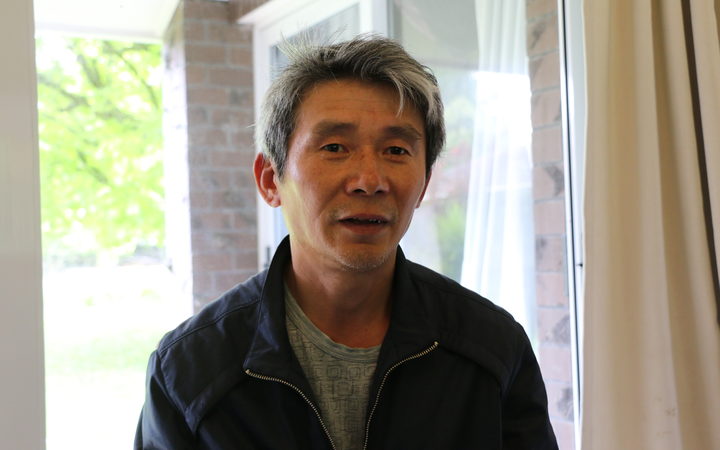 Mao Qunyou was granted a limited visa so that he could work while helping with the investigation.
Photo: RNZ / Jessie Chiang

Some of his co-workers who are not helping on the case have been free to progress with their visas to full residency.

The Migrant Workers Association said that is unfair and expelling workers from the country runs the risk of letting the trafficking of foreign workers continue unpunished.

It has been almost four years since Mao Qunyou, a brick foreman, moved here, returning only once during that time to see his wife and daughter in China.

He is one of more than 50 Chinese workers who claim they were misled by a New Zealand-based recruiter about their salary and employment rights.

Mao, along with 18 other people, received a limited visa so they could continue working while assisting in the New Zealand Immigration investigation.

However, that visa does not qualify for the new fast track residency program. Mao said that is unfair.

“We hope that Immigration New Zealand can treat us like they treat others,” he said.

Another worker, Sheng Canhong, said that the men in the group who did not help in the investigation did not receive these limited visas and it was ironic that some of them are now able to move towards residency.

“They have transited to a work visa, some have a three-year work visa, but only more than a dozen of us were selected by Immigration and obtained this type of visa,” he said.

“Why can they, but we can’t? It seems like a very simple question.”

Unite Union advocate Mike Treen has been helping men with their claims against their employers since early 2019. He said it doesn’t make sense for this group of men to be treated differently.

“They are all needed workers in the construction industry in New Zealand, and the reasons we gave roads to people who have regular visas also remain in effect.”

Anu Kaloti, president of the Migrant Workers Association, said these workers are helping to prevent more people from falling victim to the exploitation of migrant workers.

“The limited-purpose visa holders are actually favoring the government by staying here and witnessing a very important investigation in the case of Chinese construction workers,” he said.

“If we don’t make those people stay, we may never get to the bottom of this mess that they were victims of and then we will have more people affected by it.”

Kaloti said that the workers have been here long enough and have also been through many difficulties.

“They were seriously injured. They were greatly exploited. They were part of what I would say is like a human trafficking network, so from that perspective it is known that the correct thing would be to include them in this new residence visa,” he added. she said.

In a statement, Andrew Craig, immigration policy manager for the Ministry of Business, Innovation and Employment, confirmed that limited visa holders are not eligible for the new pathway because they are intended for short stays to allow people to achieve an express purpose. . .

“Other short-term visa holders are also excluded from this unique residence path, such as visitors, vacation workers, seasonal workers and critical short-term workers,” he said.