Children’s Commissioner Andrew Becroft wants action to be taken on what he says are entrenched injustices in the juvenile justice system. 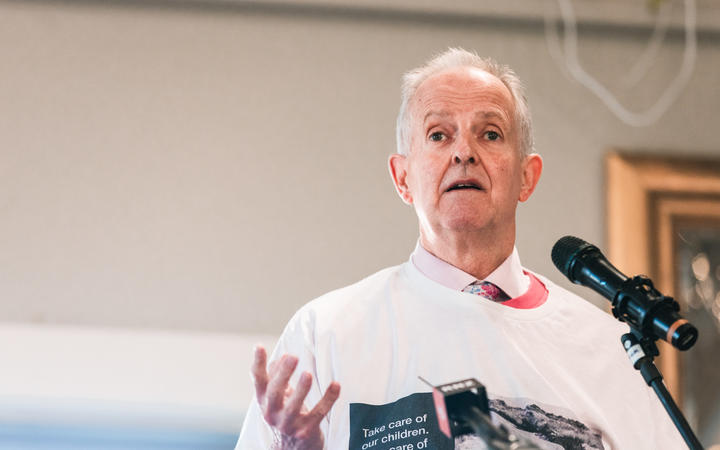 Judge Becroft has delivered the first in a series of speeches he will deliver in his final days as a commissioner.

Today he outlined the areas of the juvenile justice system that he would like to see reformed, both urgently and in the future.

Towards the start of his presentation, Becroft said that the juvenile justice system was working.

He said crime rates had fallen dramatically in the last decade and all the key statistics of the juvenile justice system were in decline.

“But it could work better, and that’s really the point of my talk.”

Among the changes Becroft called for today was an immediate end to what he said were some unacceptable police practices.

They included the use of restraint chairs and spitting hoods on children, the latter 129 was used on tamariki and rangatahi between 2016 and 2020.

“The United Nations has said that children should never be tied to chairs, much less in police cells alone,” he said.

“Spit hoods should not be used on children.”

Judge Becroft also wanted restrictions on the police practice of photographing young people and a change in policy on drivers fleeing the police.

Finally, he wanted to abolish the option of the juvenile court to send young people to police cells.

By Maori for Maori

Juvenile court rates and the numbers of Maori in the juvenile justice system were falling, Judge Becroft said, but remained disproportionately high.

Maori had a juvenile court appearance rate more than eight times that of Europeans and other groups, he said.

It showed a pressing need for a “by Maori, for Maori” approach.

“You know, I’m not talking about anything new when I talk about Maori approaches to Maori,” Judge Becroft said.

“This was always the vision of the 1989 legislation.”

Becroft also wants the Juvenile Court to be independent and fully contained.

He said it was fantastic when the government announced in 2017 that the Juvenile Court would deal with the majority of 17-year-olds.

However, a small list of serious crimes was omitted, which are still included in the adult system.

“As could have been predicted, it has worked very well. The system has not only responded well, it has responded well to 17-year-olds.”

“The time has come to complete that step and have all 17-year-olds now in the juvenile justice system.”

He said that confirmation of that change would be the best news he would receive upon leaving office.

In New Zealand, the minimum age of criminal responsibility is 10, but Judge Becroft advocated raising it to 12.

He said no one had been accused of being 10 years old since at least 1974.

Becroft said he would like it to go back up to 14, but only when the care and protection system has been radically transformed.

“Then you could get to 14. Because then we would have an effective alternative.”

There are four residences for juvenile judges run by Oranga Tamariki across the country and Judge Becroft wants to see them abolished.

He said New Zealand had a policy of segregating misbehaving children and youth from the mainstream and grouping them together.

“When you think about it, grouping together is not the recipe for lasting rehab. It just isn’t.”

He said the risks of bullying, violence and trauma were soaring and instead advocated for smaller and safer facilities in the home.