The jury deciding whether two of the top Black Power members were responsible for the death of a Mongrel Mob member will hear two very different versions of events over the next six weeks. 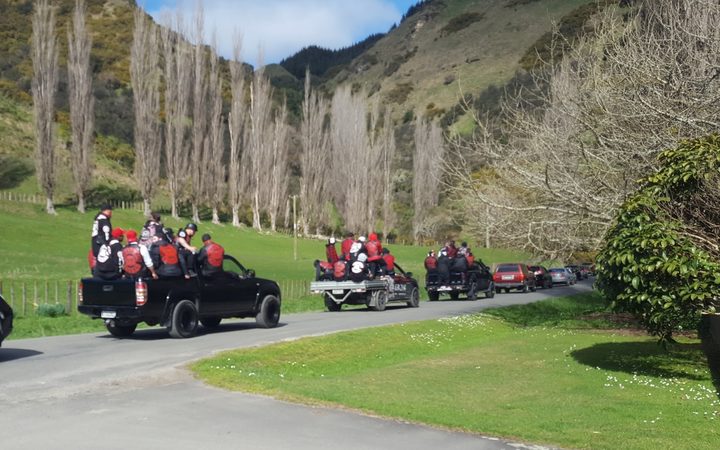 The Crown has accused Whanganui Black Power Chairman Damien Kuru and another high-ranking member, Gordon Runga, of killing Kevin Ratana because he dared to live in an area considered “their territory”.

Ratana, 27, was shot in the neck outside his Castlecliff home in August 2018 and died instantly.

Damien Kuru and Gordon Runga have pleaded not guilty to one count of murder and one count of participation in an organized criminal group.

They are being tried in Wellington High Court before a jury of six men and six women.

Prosecutor Chris Wilkinson-Smith said he must have been high on the Black Power’s “business list” to get rid of Ratana, after he began spending more time in Castlecliff with his partner, who had two young children.

“A member of the mestizo mob living in their territory is completely unacceptable to them … it is a provocative insult in their eyes.”

“He was very visibly in another gang, he wore the colors red and on occasion his patch.”

Wilkinson-Smith said that Ratana had embarrassed the Black Power and “fanned the flames” in the weeks leading up to August 21, 2018.

“About a week before, Mr. Ratana was in a car and he was waiting with some others … two members of the Black Power saw him. They armed themselves with poles and came looking for him.

“However, that attempt to confront or intimidate did not go as expected because Mr. Ratana came out and confronted them with a firearm and they had to turn around and flee.”

He said that on the morning of the murder, Runga rounded up the members and around 9:30 a.m. four men on foot, as well as others in three cars, drove about 300 meters down the road to Ratana’s home. The men carried weapons, including two shotguns.

In addition to Ratana and her partner, two other adults, a small child, and a baby were in the house at the time.

The Black Power members stood in front and screamed, then began to wreck Ratana’s car.

When Ratana came out to confront them, armed with a sawed-off shotgun, they shot him.

Wilkinson-Smith said it was the Crown’s case that Runga fired the fatal shot, but that the gang’s president, Kuru, was also responsible for the murder.

Two more shots were fired after the assassination, and Wilkinson-Smith said that in the following days there was fortification at the Black Power headquarters, with members gathering arms and ammunition, in preparation for retaliation by the Mongrel Mob.

However, the lawyers for the two men presented a very different version of events.

“He had nothing to do with the attack … he was not there. He was not involved in it and had no idea that anything had happened until it was done.”

He said that the only reason Kuru had been involved was simply because he was the president of the Whanganui chapter.

“Without that crown on my head, I wouldn’t be sitting there today. The Crown’s case is that it ordered this coup, but no witnesses will tell you.”

He said the jury would hear evidence that after the event Kuru was extremely angry and called a meeting demanding to know who was responsible.

Likewise, Runga’s attorney, Carrie Parkin, said her client was not even on the street at the time.

“He was not on Puriri Street at the time.”

He asked the jury to keep an open mind and not jump to conclusions.

Four other Black Power members have previously pleaded guilty to a number of charges related to Ratana’s death, including murder, murder and participation in a criminal group.

During the six weeks, the trial is scheduled to testify for 120 witnesses, including eyewitnesses, police personnel, scientists, gang experts, and a member of the Black Power who was involved in Ratana’s murder but received immunity from the Crown to change of testifying.