Mandatory vaccinations have been introduced for health and education workers as 35 new community cases are reported and the government confirms that there will be no immediate changes in alert levels. 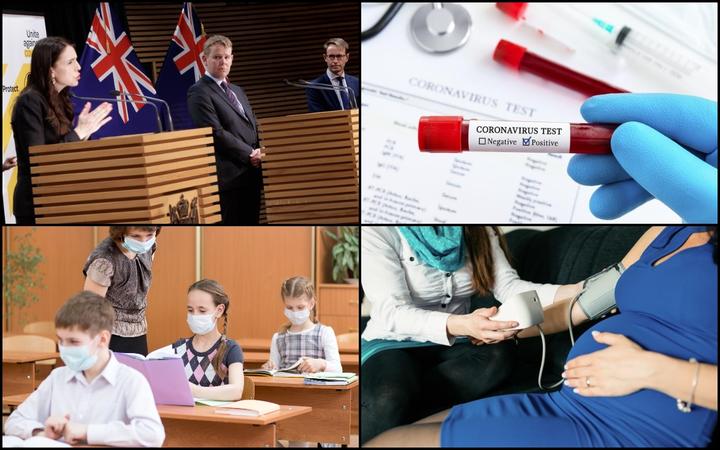 Clockwise from top left: Prime Minister Jacinda Ardern announces no change in alert levels; 35 new community cases reported; Midwives and other health workers should be vaccinated; Like all the people who work in schools
Photo: POOL / AFP / 123RF

Ardern announced that Auckland would remain in its current configuration until 11:59 p.m. M. From next Monday, October 18, while Waikato and Northland would remain at level 3 until 11:59 p.m. M. From Thursday. The Auckland setup will be reviewed next Monday, while the Cabinet will meet on Wednesday to discuss Waikato and Northland.

“New Zealand is in one of the most difficult and challenging times of the Covid-19 pandemic yet,” Ardern said.

“However, there is a clear path to follow in the coming months where New Zealanders should be able to move on to living with fewer restrictions and more freedom as a result of higher levels of vaccination.”

Ardern says that the restrictions are extremely important to control the virus while we vaccinate the population.

“These measures, when followed, make a difference.”

She said the r-value has risen to between 1.2 and 1.3, and this means that the cases are likely to grow in the coming days.

“If followed, our alert level restrictions can help control that spread.”

Mandatory vaccinations for workers in the education sector

Auckland schools will not reopen after the school holidays on October 18. Instead, distance learning will resume.

Hipkins said the government would be evaluating the possibility of reopening schools week after week. He told Checkpoint there was a “good chance” that they would open before the end of the year, and not opening until the first quarter of next year would be the “worst case scenario.”

All staff, including teachers and support staff, must receive their first dose by November 15, 2021 and be fully vaccinated by January 1, 2022.

If schools resume before the end of the year and teachers are not fully vaccinated, those staff will be tested for Covid-19 every week.

All teachers will need to be evaluated before returning to work, he said.

The measure has been well received by the Post Primary Teachers Association and NZEI Te Riu Roa.

Auckland schools will be closed after school holidays are over
Photo: 123RF

The cabinet has also taken steps to require vaccination of high-risk workers in the health and disability sector by the earlier date of December 1, 2021.

Those high-risk workers include general practitioners, pharmacists, community health nurses, midwives, paramedics, and all health workers at sites where vulnerable patients are treated.

These workers must receive their first dose by Oct. 30, Hipkins said.

Epidemiologist Michael Baker said there are still gaps in the plan for mandatory vaccination of healthcare workers and the government must quickly fill them. Baker said all visitors must undergo rapid anti-gene tests.

The 35 new cases reported today are in Auckland. The Health Ministry said in a statement that 14 have known links to existing cases (including four domestic contacts) and 21 remain under investigation.

Earlier today, Ardern revealed that the positive case identified in Katikati in the Bay of Plenty over the weekend has been retested, as has her family, and the results have been negative.

Bloomfield said locations of interest related to the case will be removed from the Health Ministry’s website.

Speaking at the press conference, Ardern said the “easiest thing” for the person in Northland who traveled with a positive case is to come forward and get tested.

Ardern said officials were using all the tools and means they had to locate the person, and asked health authorities and police to consider naming him.

Genomic sequencing of the positive case he traveled with has confirmed that they are related to the Auckland outbreak. She remains in an Auckland quarantine facility, while 21 close contacts have been linked to her.

Because the woman has not cooperated, health officials do not clarify the information about where she traveled, so they rely on the high rates of tests in the region to have the necessary confidence that there are no undetected cases, Ardern said.

Bloomfield said testing rates in the region should increase. He urged everyone who was in contact with the positive case and his companion to get tested, symptomatic or not. He also urged anyone else in the region with symptoms to get tested.

Ardern said he disagreed with Te Pāti Māori, who describes the low vaccination rate of Maori as a modern form of genocide.

Te Pāti Māori is calling for Auckland to return to level 4 until Maori are 95 percent vaccinated.

He also wants the rest of the country to return to alert level 3.

The party’s co-leader Rawiri Waititi said the government’s Covid response has not worked for Maori.

Maori urged to get vaccinated

Presidents Iwi National Pandemic Response Group said how the outbreak is addressed in the coming days and weeks will determine how the rest of the year unfolds.

Data from last week shows that 58 percent of Maori have received their first dose and only 35 percent are fully vaccinated.

The group’s co-leader, Mike Smith, is asking rangatahi to help protect his whānau by getting vaccinated.

Meanwhile, Maori healthcare providers in the Auckland suburb of Manurewa are introducing 44 camper vans with vaccinations to help reach people.

Manurewa marae executive director Natasha Kemp said they want to prioritize the most vulnerable, so they are bringing vaccines directly to the community.

Ardern said it will announce the framework for New Zealand’s next steps as vaccination rates rise in the coming weeks.