Auckland case numbers are on the rise, the National Party calls for an end to the lockdowns, and staff are being investigated by police and the Navy for crossing the Auckland boundary without exemptions. 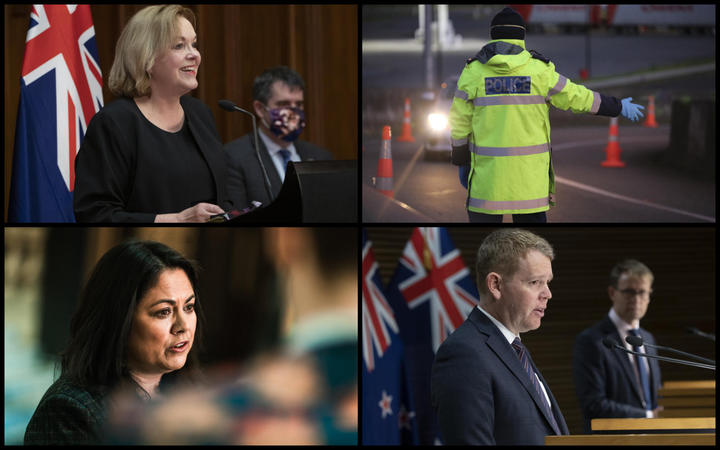 Increase in the number of Auckland cases

At today’s 1pm briefing, Director General of Health Dr Ashley Bloomfield confirmed there were 45 new community cases of Covid-19, all in Auckland.

Of these cases, 33 were known to be relatives or contacts of existing cases. All have been isolated at home or quarantined during their infectious period, Bloomfield said.

He said many of today’s cases were linked and, in a sense, “expected.”

Hipkins said the 45 new cases was a “sobering number.” But because they were known cases, the alert level decisions were made on many other factors.

“I would encourage people not to read too much. We are still aiming to do this.”

Bloomfield said that a large proportion of the cases occurred among groups of people who are in transitional or emergency housing.

“The teams are working very hard with a variety of agencies to support those people.”

Bloomfield said that everyone in Auckland should stay inside their bubbles and wear face masks.

He said the Health Ministry was asking construction, hospitality, and retail workers, who were working at level 3, to take two tests at least five days apart over the next two weeks, whether or not they had symptoms as if not.

“I would like to emphasize that this test is voluntary,” he said.

Hipkins said that at midnight the requirement would go into effect for all border workers and positions where they could come into contact with Covid-19 to be vaccinated.

As of this morning, 98 percent of active border workers have been vaccinated with at least one dose and 93 percent are fully vaccinated, he said.

“I want to remind everyone who works on the border but has not yet been vaccinated that they now have 24 hours until midnight tomorrow to receive their first vaccination if they wish to continue working on the border,” Hipkins said.

Police and Navy personnel investigated for violation of travel restrictions

A high-ranking police officer, an inspector, is under investigation for crossing the Auckland border without an exemption to attend a funeral.

Auckland is currently at Alert Level 3 and restrictions related to essential travel only remain in effect.

In a statement through the media center, a police spokesman said the reported incident was very concerning.

The media center has not answered questions about rank or age, which district was responsible for investigating, whether or not charges can be brought, or whether or not the inspector was allowed to travel beyond the border.

The police watchdog, the Independent Police Conduct Authority, has been notified.

In another incident, a junior navy sailor is also being investigated, after allegedly violating Auckland boundaries to attend the funeral of a close relative.

The defense force said the junior sailor, who is fully vaccinated, traveled out of the region last weekend without requesting a travel exemption from the Health Ministry.

The sailor was instructed to isolate himself on his rural Hawke’s Bay property and undergo a Covid-19 test.

The Navy is investigating the incident and the surrounding circumstances.

Possibility of Covid-19 in Tauranga

People in Tauranga are urged to get tested for Covid-19 symptoms after the virus was detected in a sewage sample collected last Thursday.

More sewage samples have been taken and results are expected tomorrow.

Deputy Health Minister Dr Ayesha Verrall told Morning Report that a cautious approach was being taken and that anyone in the Bay of Plenty with symptoms should get tested.

“We are eager for people in Tauranga who have symptoms to get tested in case it turns out to be a really positive result in the sewage,” he said.

“There is a possibility” that Delta is in the area, he said, but there have been false positives in the sewage in the past.

Several thousand people contribute to wastewater in a single sample, so it is unwise to try to read tea leaves on the level of PCR positivity, he said.

When asked if the truck driver who recently tested positive after traveling from the Auckland border to Tauranga was an area of ​​concern, Dr. Verrall said there were a wide range of sights after the case.

Vaccines abroad are a problem for the Ministry of Health

The Health Ministry said it does not recognize vaccines that a person has received abroad and confirmed that they currently cannot be added to a person’s vaccination record or verify their authenticity.

RNZ understands that there could be more than 1000 people in contact with the ministry to have their vaccines recognized here abroad.

Chief Health Officer Dr. Ashley Bloomfield said work was urgently underway on a system to verify vaccines abroad, ahead of a planned launch of vaccine certificates next month.

Bloomfield said it was a multifaceted problem.

He said the ministry was giving advice on which vaccines (AstraZeneca, Janssen or Moderna, for example) it would recognize for future trips to the country.

But he is also working on how to verify and record the vaccinations of people abroad.

Prime Minister Jacinda Ardern said there would be no adverse implications for people if the ministry was not prepared with a verification system by the time the certificates were introduced.

“I’m sure we can find a solution,” Ardern said.

“We do not intend to invalidate someone’s legitimate vaccine if they have received it abroad, so it is just a matter of making sure we have a solution.”

Bloomfield admits that vaccination verification will be easier in some countries than others, but there will be no discrimination against people who received a vaccine in less developed countries.

The National Party has called on New Zealand to first end the blockades and then reopen to the world based on two vaccination targets.

The party’s plan, which he said has been closely scrutinized by experts who would not be publicly named, includes three “pillars.”

The first pillar includes 10 actions to boost New Zealand’s response, the second is a 70 to 75 percent vaccination target to end the closures and the third is an 85 to 90 percent target for reopening to the world. .

The strategy aims for a “vigorous suppression” of Covid-19, while accepting that elimination of the Delta variant and other similar strains may not be possible.

In announcing the plan this morning, national leader Judith Collins said the government’s Covid-19 strategy had been highly successful, but this year it had taken its eye off the ball.

“Delta is here, it may not be possible to eliminate it, and it would almost inevitably come back to the community. Whatever happens, we have to reopen to the world and National’s plan outlines how we can do that.”

He said the government was being invited to go ahead and use all of National’s policy.

Covid-19 Response Minister Chris Hipkins said he has not yet read National’s plan for the pandemic in its entirety.

“It is clear that the National Party wants to open the borders, have hundreds of thousands of people come in. Therefore, one can conclude that the biggest promise they are making at the moment is that they are willing for the Kiwis to get Covid for Christmas.

“The reality here is that they have not provided any model for the number of Covid-19 cases they would be willing to tolerate or what they would do in certain settings because it would almost certainly result in a significant number of cases in the community. No They have given no indication of what they would do to manage that. “

The government is seeking 150 participants for its self-isolation pilot in Auckland and Christchurch and expressions of interest open tomorrow morning.

People would be monitored via smartphone technology and regular random phone calls would be made to verify compliance, Hipkins said.

They would also be charged $ 1,000 to cover basic costs like transportation and other costs associated with the pilot, he said.

The cabinet has formally approved funding for a new facility: the Elms Hotel in Christchurch. Work was being done to keep that up as quickly as possible, Hipkins said.

The Elms will add another 85 rooms to the MIQ network.