The number of Covid-19 cases continued to fall in today’s community outbreak, while a new model released by Prime Minister Jacinda Ardern showed that a 90 percent vaccination rate is needed to avoid future lockdowns. 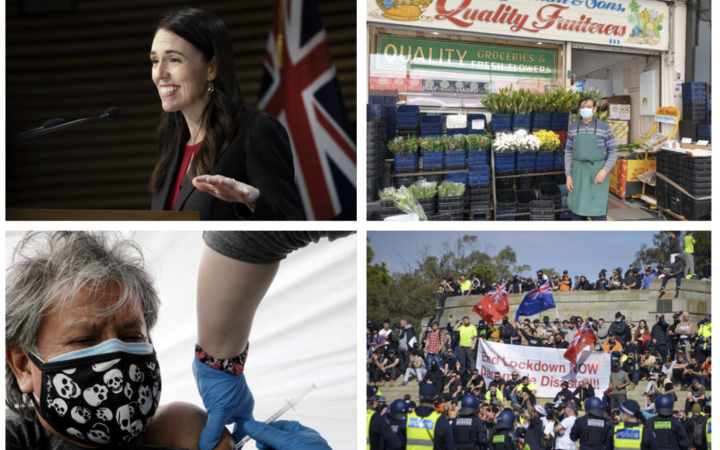 Today 15 new community cases were announced, all in Auckland. This was less than 23 on Wednesday.

Te Pūnaha Matatini modelers said in their new study that the higher the level of vaccination across the country, the lower the need for future closures might be.

Their new model showed that even with an 80 percent vaccination rate, there would be 7,000 deaths and 60,000 hospitalizations per year.

However, Professor Michael Plank said that if New Zealand can raise its vaccination rates to more than 90 percent of those over 12 years of age, the virus can be controlled with more sustainable measures, such as testing, contact tracing and wearing masks. .

About 73 percent of the nation’s eligible population has currently received a dose of the Pfizer vaccine.

“If almost all New Zealanders get vaccinated, we could avoid the need for strict restrictions on alert levels 3-4.”

“The much smaller need to use locks is a very big carrot for everyone in New Zealand. If we can go up to that 90 percent rate, then we can say goodbye to locks.” 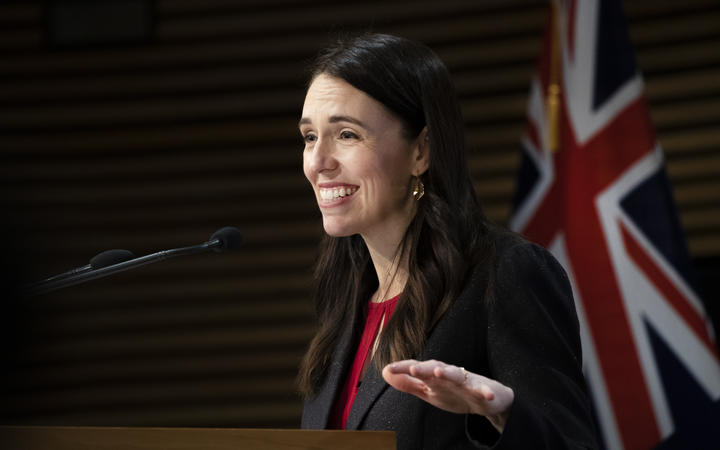 “It all comes down to vaccination.”

He said closures were needed in the first phase of the pandemic because there were no vaccines and everyone had to be isolated.

“With vaccines, we can turn that model around,” he said, so that positive cases can be isolated while others have the protection of vaccines.

“Children cannot be vaccinated. It will reach them. And we have seen it reach them in this outbreak,” he said.

The plan was never zero cases, but rather “zero tolerance” for Covid, he said.

“Models are imperfect beasts, but they give us tools to make our decisions. The principles are clear: vaccination is important.”

Mount Wellington added to the suburbs of interest

Mount Wellington was added to the government’s list of suburbs of interest today. Chief Health Officer Dr. Ashley Bloomfield said people in the area are being urged to get tested, whether they have symptoms or not.

There are pop-up test centers at the Netball Center on Ferguson Drive and at Mount Smart Stadium.

The other suburbs of interest are Māngere, Favona, Otara and Manurewa.

Mount Eden, Massey, and Papatoetoe have now been removed from that list.

In another suburb of interest, more than 10 percent of the population has already been screened. More than 1,300 people have been tested at Clover Park in the past two days.

Dr. Bloomfield also announced at today’s press conference that a section 70 warrant for North Hauraki has been lifted after positive cases involving a prisoner rescued from an address on the Firth of Thames. 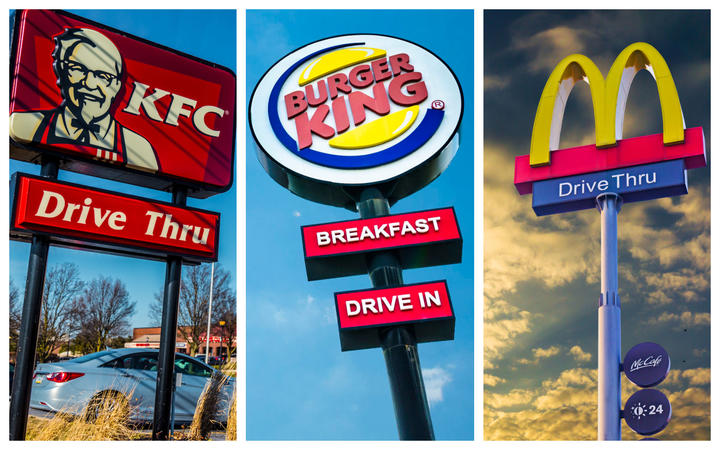 Would you like a jab with your Big Mac?

Place Your Order – Vaccinations will start at popular fast food outlets in Auckland in the next few days.

The Health Ministry said it has been looking for new opportunities to vaccinate people where they appear in large numbers in the community.

A spokesperson said that includes the many fast food options that have been so busy when the city moved to level 3.

Meanwhile, thousands of Auckland companies are busy reclaiming tools, albeit with limited capacity.

Naylor Love CEO Rick Herd said Morning report all of their staff are abiding by the rules, and if workers are ever seen not adhering to Covid-19 protocols, the public should.

Herd said that mandatory vaccinations are a tricky subject, but he doesn’t think New Zealand companies will protest like their Melbourne counterparts have in response to Covid-19 restrictions.

“There are some legitimate reasons why people will not want vaccines, some for health reasons, some for religious reasons and we have to respect that.

“What we are doing and most of the industry is trying to do is start a consultation process, identifying who in your organization resists getting vaccinated.”

Large Aotearoa corporations are also beginning to offer incentives to employees who get vaccinated.

Fully vaccinated employees of Vodafone, Vodafone Retail and Hays contractors will be eligible for a $ 200 broadband credit and a chance to win a new phone.

Warehouse Group is also offering $ 100 to each team member who has been fully vaccinated.

Vodafone CEO Jason Paris said Morning report The company was also giving staff half a day off to get vaccinated as it recognized that time was a barrier faced by many.

Paris said his company was doing everything it could to facilitate staff vaccinations, as well as offering financial incentives.

“It doesn’t matter if you’re in the elimination camp or the ‘live with it’ camp with Covid. Both camps depend on New Zealanders getting vaccinated as quickly as possible,” he said. 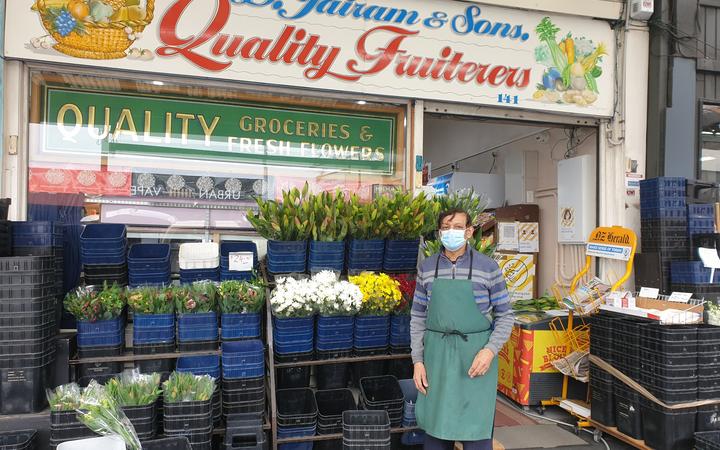 The tension felt by companies, students and travelers.

Many Auckland residents surprised by the Level 4 lockdown are expressing anger that they are affected by cancellation fees for rentals booked during the lockdown.

Eloise, a Waikato resident, who did not want her last name used, lost more than $ 800 on an Airbnb rental that she couldn’t stay in because the country was locked in.

“It was a blockade, they weren’t even willing to negotiate with us.”

Consumer NZ says that since the most recent shutdown, its contact center has received up to 15 complaints about accommodations affected by Covid-19 each week.

“The New Zealand consumer would prefer that customers get a full refund from the company, especially if they face difficulties,” said a spokesperson.

Other Auckland parents expressed frustration that the Health Ministry is not allowing their children to return to boarding schools in other regions.

Jane Migounoff of Pukekohe said she and other families estimated that around 150 children in the Franklin area alone were affected by the problem.

“Pukekohe is part of Auckland so we are currently at level 3 and the schools our children attend are at level 2. The schools run with students in class and our children cannot attend so they are not learning”. ” she said.

Business owners are also concerned, with the 107-year-old Auckland Ponsonby Road business owner saying another Level 4 lockdown would kill him.

The owner of D. Jairam and Sons on Ponsonby Road, Suresh Jeram, told RNZ that “it has been very difficult for us, but in a way we are handling it.”

“But next time we have this kind of thing, we’re not going to [survive]. We will probably close. We’ve been here 107 years, “said Jeram, whose great-grandfather opened the store in 1915.

The store has recently been unable to pay its suppliers in full, and Jeram reached an agreement to stretch the company’s reimbursements. Jeram expects foot traffic to increase with more people back to work and takeout available.

“That’s what I’m betting on, things get better.

“We’ll see how everything goes. We still don’t know how it’s going to go. [But] another big block like this, and we’re done. “ 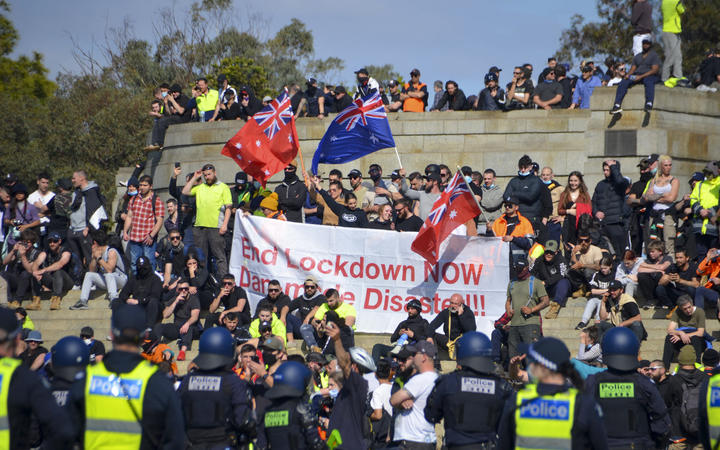 On the other side of the ditch, New South Wales recorded 1,063 new locally acquired Covid-19 cases in the 24 hours to 8pm yesterday.

In Victoria, the state recorded its highest daily case count in a single day, with 766 new Covid-19 infections reported.

Australian Prime Minister Scott Morrison condemned the “disrespectful” protests at the Melbourne Shrine of Remembrance as protesters vow to continue the chaos.

“The conduct was disgraceful,” he said.

“It was disrespectful and it disgraced the Australians who made the sacrifice of the mat and I hope each and every one of those who were there is ashamed.”

Protests against the coronavirus lockdown and mandatory vaccinations began Monday after the Victorian government announced a two-week shutdown of the construction industry, and their scope has since increased.

In the United States, US drug regulators have approved Pfizer booster vaccines for people 65 and older if they received their last injection at least six months ago.

The Food and Drug Administration pre-approved adults who are at increased risk for serious illness and who work front-line jobs to receive the booster.

It means that tens of millions of Americans are now eligible for their third chance. However, the boosters still need approval from the Centers for Disease Control and Prevention (CDC).

Independent CDC panels are holding meetings this week and are expected to back the measure quickly, US media report.

* There were 15 new community cases today.

* There are 15 people in the hospital, three in the ICU.

* Today a new case was identified at the border.