Foreign experts told the Department of Conservation that it should euthanize the calf Toa a few days after it was stranded on the rocks at Plimmerton. 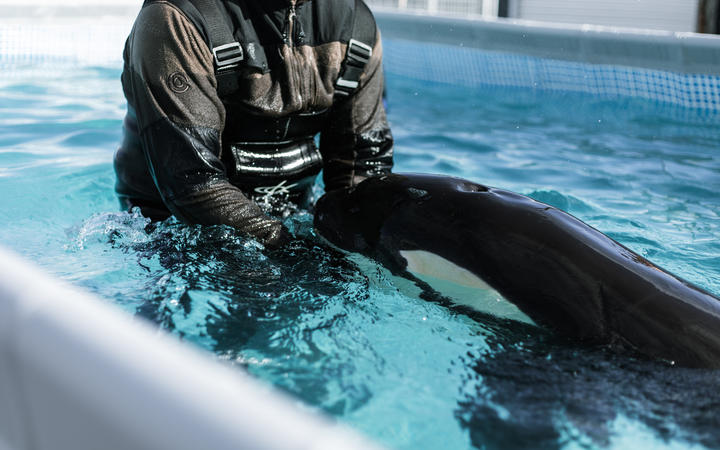 The orca calf that stole the hearts of New Zealanders was cared for for 12 days before dying naturally.

It was found by two teenagers trapped in the rocks near Plimmerton, north of Wellington in July, prompting a desperate attempt to reunite the orca with its pod.

New documents released by the Department of Conservation (DOC) today reveal that the cost of caring for Toa amounted to nearly $ 130,000.

It was thought to be between two and six months old, but had not yet been weaned from its mother.

His vulnerability led experts abroad to advise the DOC to euthanize Toa within days of being in their care.

The DOC’s director of operations for the lower North Island, Jack Mace, said it was a difficult decision to make.

“We had a variety of advice, some international experts said that the best option would be euthanasia because the probability of reunification was low,” Mace said.

“But we also had experts who said that there was a possibility of successful reunification and that New Zealand’s killer whales are critically endangered – there are only about 200 in the world.

“So ultimately, we decided it was best to keep the reunification option open while the calf was still stable.”

Mace said euthanasia wasn’t out of the question, but it wasn’t his first option.

“We had a very clear agreement from all parties, with the DOC obviously being responsible, that if we saw a serious decrease in the calf’s welfare, we would go to euthanasia, and we had a very good team that advised us and monitored the health of the calf. animal throughout the operation “.

But Massey University marine biologist Professor Karen Stockin said the writing was on the wall in those early days.

“By the time those expert opinions started to come in, it was very clear, as you can see from those papers, what the general consensus was and the concerns about the chances of survival and the increased risk of the orca’s welfare being compromised. and what that meant to Toa, “Stockin said.

The main goal in such situations was always to preserve life, but sometimes the welfare of an animal was more important, he said.

“We have very clear guidance on the animals, when they are beached, if they are so young that they are not weaned and they are not independent.

“They are also not different from the guidelines of any Australian state, around the fact that euthanasia is generally considered the first option.”

Today on the streets of Wellington, people told RNZ that they had mixed feelings about the considerable sum.

Mace said it was a justifiable amount, as it was the first time DOC had attempted to reunite a young, unweaned calf with its herd.

“I think it was worth it … these animals are critically endangered and overall, we found them worth pursuing.

“Half of that money went to operating costs, the other half to staff salaries that would have been spent on other work activities.”

Toa died on July 23 after deteriorating rapidly and having trouble breathing.

The DOC was going to make the decision to euthanize the calf the next day, but needed iwi and killer whale expert Ingrid Visser to be on their side.

Stockin regrets that there is much to learn from him, including about the public’s expectations.

“The longer this process went on, the more it was invested in, the more public expectations really grew,” he said.

“And that obviously became quite a difficult situation to handle.”

Mace said the DOC was still reviewing how the operation went and would use the lessons to better prepare for next time.