Auckland builders are told to plan carefully to avoid chaos when they return to work tomorrow. 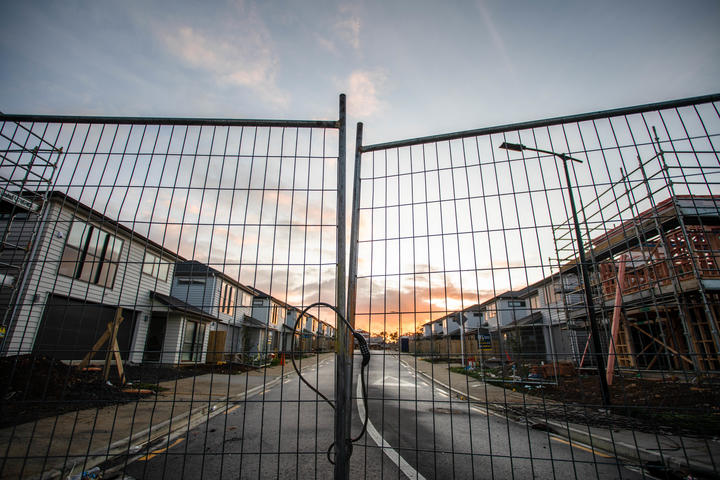 Most sites are expected to reopen at level 3.

But they will immediately be faced with what other companies across the country are struggling with: material restrictions.

Broswick Builders’ Todd Wickenden has seven projects to jumpstart. He’s been quick to make sure all his workers have masks, sanitizer, and know the reopening rules.

“The phone hasn’t really stopped, you know, with the subcontractor organization … all the clients call and are so excited to get back to work.”

“It’s not the easiest thing to handle,” Wickenden said.

Construction Health and Safety NZ says companies should talk to each other now, so they don’t fall in love with them tomorrow.

“One of the things that probably worries us a little bit is the excitement about getting back to the site, particularly for a small residential site, is that all the exchanges show up on the first day and there is a bit of chaos,” said the CEO. Chris Alderson.

“People [need to] sit back and do some planning.

“We certainly don’t want to have any problem with the appearance of people with a total lack of protocols or controls.”

Builders may be eager to get back, but Wickenden cautions that Covid controls will slow work down a bit. “It is not very efficient,” he said.

The thaw is now beginning though, for the likes of Mitek’s Tony Castledine, the one most traders rely on for steel plates to make frames and armor.

He is working out how to safely get some 65 platemakers and distribution personnel back to his Auckland factory.

“We finished before closing with a container in our yard here in Auckland ready to go to Christchurch,” Castledine said.

It would have kept the South Island running for days, but it couldn’t be moved.

“We had a social obligation not to break the rules,” he said.

“So yeah, we’re going back to just over 200 tons of backorders for processing and shipping.” That would take at least a couple of weeks.

Mitek has contacted all the major chains to tell them that the orders will be completed, in strict order.

“We don’t allow anyone to jump the system in terms of priority,” Castledine said.

“There will be no queue skipping, there will be no customer charges. We are totally dependent on couriers or our normal delivery service, which in itself could cause delays.”

However, the tail hopping is happening at the other end of the supply chain, as merchants in Tier 2 areas juggle scarce supplies.

Jamee Colman of Namloc Build in Wellington had commissioned a plasterboard and then got a surprise.

“When I went to pick it up, they had already sold it to someone else,” Colman said.

“So they ended up pinching what I [needed] to fill someone else’s order and I was thinking, ‘Shit, this is getting really fierce.’

They told him that he had gotten what he wanted, but he was restless. “I’m not a big fan of taking this other guy’s stuff.

“You know, like, obviously, yes, I will, because you’re offering it to me, but I feel horrible for doing that.”

At the beginning of last week, Colman had driven around four traders until he found the gib board he needed, buying 15 sheets, although he only needed 10 “because of the feel of the value of those sheets.”

However, another order for plasterboard arrived quickly and was able to keep its seven workers busy.

“I feel like we’re out of the woods to a certain extent,” Colman said.

However, the Construction Industry Federation says it will take weeks and months to restore supply and inventory levels.

Chief Executive Officer Julien Leys said one problem is that only half of Auckland’s warehouse and manufacturing workers are able to return to Level 3 and 80 percent to Level 2.

“Then we will see a significant increase in additional new orders starting tomorrow.”

The Next Serious Shortage Looming? Skilled workforce, with a shortage of 25,000 workers in the industry, which again needed urgent government intervention, this time around MIQ, Leys said.

The federation is now working to advise the government on how to improve the supply chain in the event of another lockdown, something Mitek’s Tony Castledine says is vital.

“We just have to be warned and be prepared for the fact that this could get us again,” Castledine said.

“Lessons to learn? Well, keep our warehouses as stocked as possible.”

“Those Christmas move-in dates are going to be really hard to come by right now,” Todd Wickenden said.