A truck driver who has crossed the Auckland border tests positive for Covid-19, the first vaccination buses hit the road, and collection limits may increase below level 2 if Auckland drops one level. 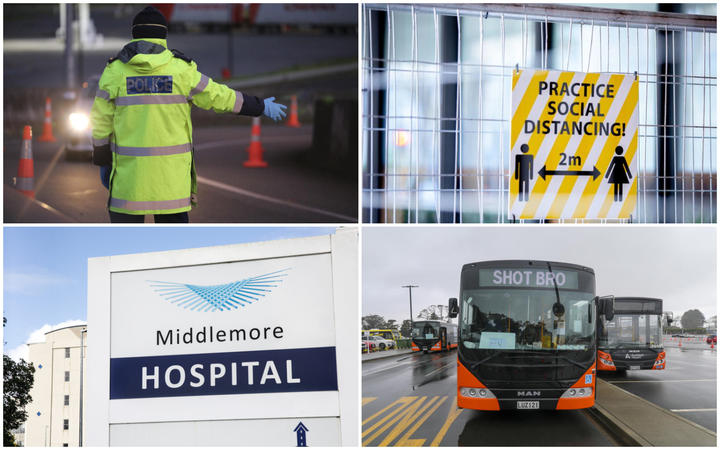 A truck driver who crossed the Auckland border tested positive for Covid-19.

The controller was previously tested on August 22. They work for food provision services and their contact was limited to deliveries and returns.

Dr. Bloomfield said the driver was tested after isolating him as a domestic contact and health authorities are now trying to determine any locations of interest.

He said it underscores the importance of testing at the Auckland border, which becomes mandatory tonight.

Under the new rules, the Health Ministry will require that all essential workers crossing the Auckland border have undergone a Covid-19 test in the previous seven days, although they will not be required to prove they have tested negative, only who have had the test.

The first in a series of vaccination buses aimed at increasing the number of Covid-19 injections in South Auckland hit the road today.

Prime Minister Jacinda Ardern wants to see 80 percent of eligible Aucklanders with at least one dose by Monday.

Maori health leaders in Auckland say today’s deployment of buses and mobile clinics is part of a long-overdue vaccination outreach program tailored to the needs of their communities.

The Waipareira Trust said the buses and mobile vaccination clinics are part of a program designed to vaccinate Auckland’s Maori and Pasifika, many of whom were working poor and unemployed poorly served by the health system.

Meanwhile, health experts say talking about a vaccination target before opening the New Zealand border is futile, citing issues of vaccine inequity, protracted Covid and an unacceptable death rate from the disease.

Middlemore Hospital has begun screening new patients for Covid-19, with mobile testing units offering testing to all patients who stay there, including asymptomatic ones, as well as new patients.

The move was sparked by investigating unrelated cases in the outbreak, those with no known connection to current groups, and to check whether the virus is circulating undetected in south Auckland.

The hospital’s medical director, Pete Watson, said it was part of the surveillance tests that were being conducted in many parts of the city.

Right now, there are between 200 and 300 patients in the hospital, and up to 50 are likely to be sampled a day that they otherwise wouldn’t have, he said.

Sports teams, business people and artists have been lobbying MIQ at a time when many New Zealanders are unable to return home due to a shortage of MIQ venues.

The Bangladesh cricket team, for example, will be able to visit New Zealand twice this year, before many New Zealanders can return.

New Zealanders caught overseas will have one hour to enter, where they will be placed in a random queue and given a spot when they get to the front.

About 4,000 rooms at a time will be released every fortnight, but people abroad who need to travel urgently can still request an emergency location in managed isolation.

Gathering limits may increase below level 2

At the daily briefing, Prime Minister Jacinda Ardern said that if Auckland lowers an alert level next week, the rest of the country will see some relaxation of the alert level 2 rules.

Earlier in this outbreak, Cabinet changed the Alert Level 2 setting due to the Delta variant.

But if Auckland moves to level 3 next week, the Cabinet would consider increasing the number of people allowed in level 2 meetings to 100 people, he said.

There are currently 13 new cases of Covid-19 in the community, all in Auckland.

There were also three border cases and two historical cases in managed isolation.

The Health Ministry said there have now been 996 cases in the current community outbreak: 979 in Auckland and 17 in Wellington.

He said 445 of the Auckland cases have already been recovered, along with 15 of the Wellington cases.

There are 19 people in Auckland hospitals with the coronavirus, four of them in ICU or HDU, and all require ventilation.