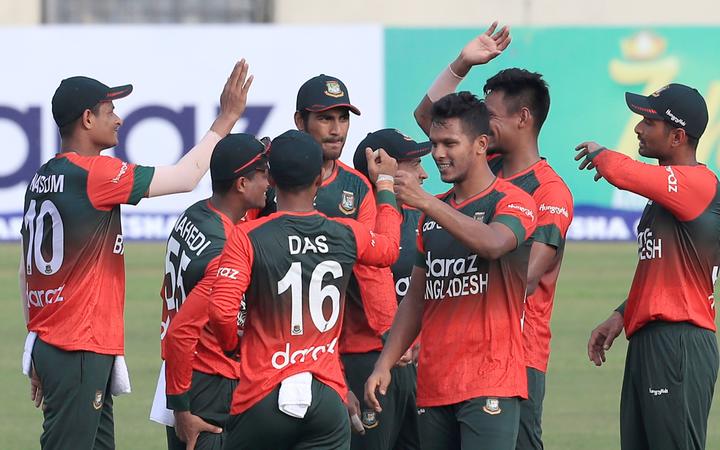 The Bangladesh cricket team has been to New Zealand twice this year.
Photo: PHOTOSPORT

The Netherlands cricket team is also going through the highly controversial MIQ system, which ranks lower than Afghanistan in the International Cricket Council (ICC) One Day International (ODI) ranking.

Other MIQ’s special group assignments have been made public., including more than 1,300 rooms reserved from now until February for staff of international Antarctic programs, and 400 rooms for entrepreneurs and entertainers who will attend Expo 2020 Dubai from October.

This is so while many New Zealanders are unable to return home due to a shortage of MIQ rooms.

The Ministry of Business, Innovation and Employment (MBIE) said that a week in mid-August there were an average of 19,781 unique users on the site each day. There are only 4,000 rooms in total available every fortnight, or less than 300 per day on average, so at that time there were 65 times more people looking for rooms than rooms available.

Group assignments are decided by government ministers headed by Immigration Minister Kris Faafoi. To be eligible, groups must be sponsored by a government agency and ministers must determine that they are in the national interest or have a “significant” economic impact. National security or international obligations are also a permissible reason.

Following the arrival of Bangaldesh, the third time New Zealand will play them in a series in 12 months, the South African and Dutch cricket teams will arrive for a tour in late summer. The three teams have 35 rooms each, sponsored by Sport NZ.

The Black Caps also have three ODIs and one T20 scheduled in Australia in February 2022. If played and the quarantine-free travel bubble is not re-imposed, the team will need MIQ rooms upon their return.

Since the start of 2021, the Black Caps and the teams they have played for or are scheduled to play for (Australia, Bangladesh twice, South Africa and the Netherlands) at the national level have required or been awarded 272 MIQ rooms.

When all MIQ facilities are available, there are 4,900 rooms available per fortnight, but about half are not used by the Managed Isolation Allocation System bookings.
Photo: RNZ / Marika Khabazi

More scientists and personnel from Antarctica have been awarded MIQ rooms, in addition to those announced earlier this year.

From this month through February next year, 1,312 MIQ rooms have been reserved for the Antarctic programs in the US, Korea and Europe. This is in addition to the 820 granted between August 2020 and February this year, and another 204 in July 2021. These are sponsored by the Ministry of Foreign Affairs and Trade (MFAT).

Christchurch is considered a gateway city and a logistics hub for the movement of people and goods to the mainland.

Four hundred rooms have been reserved for attendees at the Dubai Expo, between October 2021 and March 2022, also sponsored by MFAT. The event is a major global exhibition announcing New Zealand’s commercial, tourism and business interests. It will have the presence of New Zealand entertainers.

Rooms have also been given to 450 foreign fishermen who will arrive during the next three months, sponsored by the Ministry of Primary Industries.

The New Zealand Defense Force has 298 rooms available to them between October and February for their personnel. He also had another 89 comeback in June and July of this year.

Crankworx, a mountain bike festival, has 70 screens next month.

And from November to March, a large number of sports teams arrive in the country:

Only about half of the rooms available in the MIQ system are actually used by regular New Zealanders who book through the Managed Isolation Assignment System (MIAS).

When all MIQ facilities are available, there are 4900 rooms available per fortnight, but MIAS bookings do not use a total of 2400-2550:

Occasionally hotels are unavailable due to maintenance or ventilation issues.