More than 1,000 homes in Canterbury are without power after a stormy night for the region. 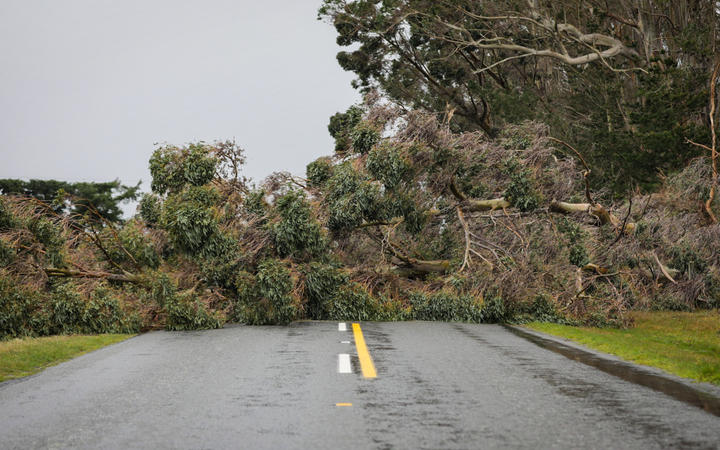 MetService says the front, which brought winds of more than 200 km / h to some places, may still cause damage and disruption as it heads to the North Island.

Orion Energy reported outages in the suburbs of Springfield, Sheffield, Whitecliffs and Whindwhistle.

There is also electricity further south in the Esk Valley and Otaio, Hadlow, Levels Plain, Taiko and Washdyke Flat areas.

Meanwhile, lightning sparked a forest fire in the Berwick Forest south of Dunedin. Crews are monitoring the site and a helicopter will be deployed later this morning to help extinguish the fire.

Several fires that had been burning on Friday also ignited due to the wind, but crews were able to put them out.

During the night winds of more than 200 km / h were recorded in some parts of the region.

Ashburton Networks Electricity CEO Roger Sutton said Morning report the last storm was not as strong as last week, but the damage was still being assessed.

“In my network we probably have less than 100 customers without power at the moment. So that’s not as bad as last week. But in all of Canterbury it’s more like 1000 or 1500.”

The damage was mainly due to downed trees that caused power lines to fall, and Sutton said additional personnel had been recruited to help repair them.

“We will work very hard to get our 100 clients back today, so it will not be so easy to fix them. Some of them could go through forest plantations where a large number of trees will need to be removed.

“We worked yesterday in the South Island bringing other resources. We have additional people in hotels overnight in Christchurch ready to get up and help us, but it depends on the level of damage and the complexity of some of the work.”

Sutton said preparing for more frequent storms in light of climate change would mean using stronger and more robust materials and alerting farmers to the need to cut down or prune trees around infrastructure.

“You build the strongest network, you put stronger poles, cables, conductors. But you also do things that are not so exciting.

“You go and talk to farmers and negotiate with them about pruning and felling trees that are close to the lines. It’s a combination of hardware, talking to customers and there are also things like software: having a computer system that knows where the interruptions are, and gets people there efficiently.

“There is a wide variety of things to do, but it is certainly a problem for the industry and we have to keep investing in trying to keep the lights on.”

“But it’s more than engineering. It’s also working with people.”

Wightmans Road State Highway 77 in Canterbury is closed due to falling trees.

There is a detour for cars, but there is no suitable alternative for heavy vehicles.

Waka Kotahi is warning people in a lighter or high-sided vehicle, or motorcycle, to cross Desert Rd this morning to be careful, due to high winds.

There is a strong wind watch from Waiouru to Rangipo.

Earlier, Mid-Canterbury farmer David Clark said Morning report his property still had power and the damage this morning was not as severe as expected. He said that the irrigators of the property moved to face the wind, so they did not overturn.

“We were relatively unscathed this morning. We have lost some young trees, which is really disappointing, but the key for us is that the irrigators are still standing,” he said.

Others were not so lucky, with reports of irrigators collapsing on farms yesterday afternoon, he said.

A red MetService warning for the region expired at 6 a.m. M.

MetService forecaster Lewis Ferris said the front still had the potential to cause destruction as it moved north. He hit Buller early this morning and is expected to arrive in Auckland tomorrow afternoon.

“It is still active in terms of lightning and in the last two hours we have seen just under 5,000 strikes and overnight they reached 10,000 strikes in a two hour period,” he said.

“I guess the good news is that as you go north we are going to start to see those winds recede.

“The winds are still very strong around the Canterbury Plains and in Christchurch, so it will still be a good morning to be on the lookout.”

Rainfall on the west coast has been heavy and has spread to Canterbury.

The highest gust yesterday was recorded at the Lamb Hill weather station, 25 km northwest of Dunedin, at 211 km / h.

“We didn’t see 211 km / h wind gusts in all of Otago, but we did see a gust at another high station in Upper Canterbury that rose to over 200 km / h. So the strong winds were there and that. wind spread to the Canterbury Plains. “

Several flights across the country have been canceled this morning due to high winds.