The prime minister confirms an agreement with Spain to obtain more Pfizer vaccines, nurses are appalled at the number of visitors at the Auckland hospital and a Maori leader calls for a new approach to vaccinating rangatahi. 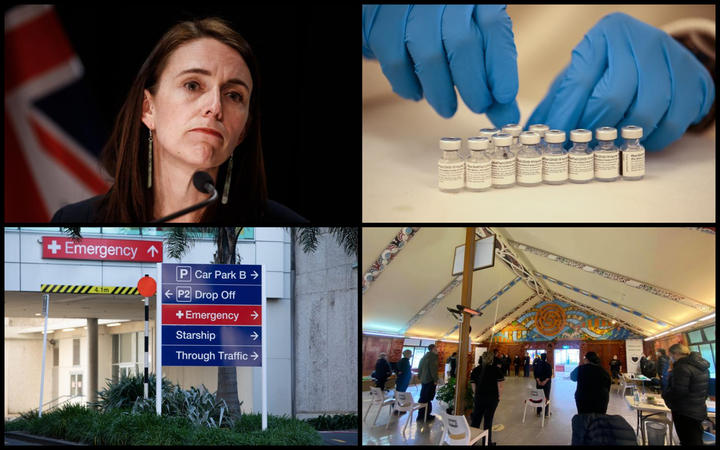 Spain supplies New Zealand with an additional 250,000 doses of vaccine

Ardern said the vaccines from Spain left Madrid at 1am (NZT) and were due to arrive in New Zealand tomorrow morning. These are in addition to the scheduled doses.

This is the first of two agreements and the second was an even larger request, he said.

Ardern said the guarantee of the extra doses meant the country’s vaccination program could continue quickly until larger supplies arrived.

He said there were several factors why Spain was chosen to source the surplus doses, including the importance of where the doses were manufactured, so that they could match New Zealand batches.

There were pre-existing relationships that meant this conversation could happen, he said.

No reason to delay the ‘general’ reconnection plan: Ardern

The plan to reopen New Zealand to the world has not changed in light of the Delta variant, Ardern said, but there may be some delays.

Earlier last month, the government announced plans to have a risk-based border starting in early 2022, but University of Otago epidemiologist Michael Baker warned this morning that it could be delayed for months by the outbreak of the Delta variant that caused national closures only five days later.

Baker said there were several reasons why the reopening would be delayed, but the most obvious was limited resources. With so much effort to combat the outbreak, there would be little left to try new ways of doing things.

“The other big change, of course, is that I think all the countries with which we are going to connect more now have the Delta variant.”

But Ardern said this afternoon that the government’s plans had not changed.

“I think what we have always said is that within this risk framework we must always be willing and able to adapt to the variants of interest.

“I think it has been assumed that somehow our reopening plans have changed drastically, I would say that is not the case. We just have to incorporate, as I say, the impact of Delta in the way we have the risk profile, but I’ve always left room for that. “

He said there was nothing to delay the overall schedule, but was less clear about the home isolation tests that would begin in October.

Nurses organization appalled by number of visitors to Auckland hospitals

Hundreds of visitors are allowed to visit Auckland’s DHB hospitals every day, despite the region being on the highest level of Covid-19 alert due to the Delta outbreak.

The New Zealand Nurses Organization (NZNO) said it was absurd that the DHB had the softest visitor policy of any DHB in the country, despite the increased risk in Auckland.

NZNO had been raising concerns about inconsistent visitor policies, as well as poor behavior by visitors, including people who refuse to wear masks and show up in groups.

WorkSafe is now involved and the Auckland District Health Board (ADHB) said it will involve health and safety representatives in decision making.

ADHB’s policy was “completely illogical given the size of the hospital” and the number of people admitted, he said.

“It is actually causing people to burst their level 4 alert bubbles, so there are many reasons why this is not a good decision and it is putting patients and staff at risk by having such a free policy. .

“Then when those people are gone, another group shows up. So it’s a very considerable risk.”

The NZNO and other unions had called for national consistency around visitor rules.

Test results for 149 patients and Middlemore Hospital staff came back negative for Covid-19 after a man admitted over the weekend was found to have the virus.

The results of the test on day 3 included those of the three patients most at risk of contracting Covid-19.

The other patients spent hours in the small ward with the man, who was initially admitted to a part of the hospital for people at low risk for Covid-19, but was later found to have the coronavirus.

“There are no suspected cases as a result of what happened on Sunday,” said Counties Manukau Health Chief Medical Officer Dr. Pete Watson. Morning report.

More than 80 patients and 29 staff members were potentially exposed.

The tests were of patients in the hospital and staff who were at work, while people who had been discharged and needed to be isolated were being followed by Auckland Regional Public Health, he said.

They will have day 5 tests tomorrow, day 12 tests and daily symptom checks.

‘We need to do something different’ – Maori leader

A Maori leader has stated that a different approach is urgently needed to attract young Maori to their Covid-19 vaccines.

Data released by the Ministry of Health showed that Maori are still behind in launching the vaccine, with the biggest disparity among people aged 20 to 34.

In Manurewa Marae, the whānau have been coming for weeks, and the number has been steadily increasing since the closure.

But CEO Natasha Kemp said they were running into a hurdle: getting the rangatahi to move on.

“I think it’s about finding those key Rangatahi leaders in our communities as well, and bringing them together and telling them, ‘We have to do something different.’

According to data released by the Health Ministry on Wednesday, 34 percent of people in the European or other category are now fully vaccinated.

But for the Maori, that was only 21 percent.

Maori Development Minister Willie Jackson said the launch of the vaccine for Maori had not been good enough.

“I am already registered, along with [associate health minister Peeni] Henare said we could have done better in the beginning, “he said.” But I’m satisfied with the effort we’ve had, particularly in the last few weeks. “

But rangatahi was always going to be a hard-to-find cohort, and campaigns were unfolding, with the government working with a variety of Maori vendors, he said.