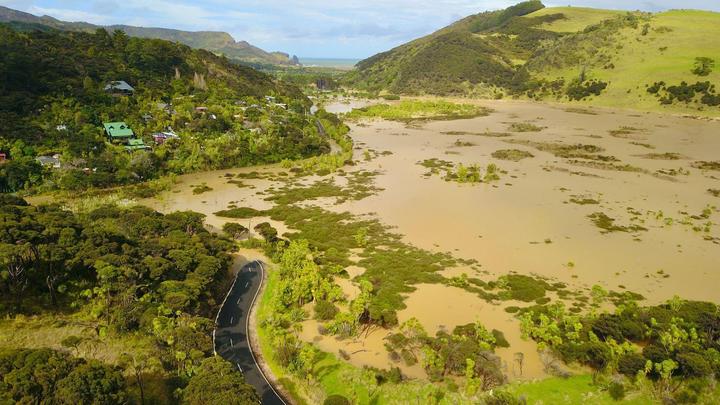 Residents of Te Henga Bethells Beach do not have access to the only road that exits the area after the flooding in the area.
Photo: Supplied / Ned Stevenson

Locals on Auckland’s west coast are now asking onlookers to stay away after people have disobeyed lockdown rules to check for flood damage in the area.

During the floods, massive downpours washed away a main road and caused massive landslides around the Te Henga Bethells Beach settlement.

The narrow and windy Bethells Road is now filled with large trucks as work is being done to restore road access, while dangerous sinking sand and giant logs pose a hazard on the beach.

Local Scott Hindman said unwanted visitors from far away places like Takapuna have turned up for sightseeing without wearing masks.

He urged people to stay away until alert levels allow and the beach is safe for public access.

The council’s general manager for building authorizations, Ian McCormick, said the council’s compliance team will follow up on homeowners who have received a yellow or red sticker to provide support.

“Most of the damage to these homes will likely not involve repair work that requires the building’s consent, but our teams will be on hand to inform homeowners of the next steps,” McCormick said.

“We know this can be a challenging time and we want to make it as easy as possible for those who have been affected.

“Anyone who has a question about the posters that have been posted on their property, or needs further assistance, can call the council’s contact center and they will be transferred directly to a designated team that has been set up to assist them.”

Mayor Phil Goff said the past few weeks have been difficult for Auckland residents.

“The floods of the past few weeks added an additional level of stress to what was already a difficult time, and my thoughts continue to be with those whose homes and businesses were affected,” he said.

Goff has urged those unable to return home to contact the council for support or advice.

There were multiple slips and falls in the area, which Goff estimated would cost around $ 7 million for Auckland Transport to fully reestablish the connection.