Opinion – In the early days of the war in Afghanistan and the aftermath of the September 11 attacks in New York and Washington DC, Bruce Springsteen was released. The ascent, his landmark Grammy-winning album about the pain, fear, anger, and sense of loss that was transforming America at the time.

He tried to capture the pain and hope of an intense national moment, when America’s sense of itself was … somewhat lost.

As I write this nearly 20 years later, it’s hard to avoid the conclusion that America is still struggling to find itself. 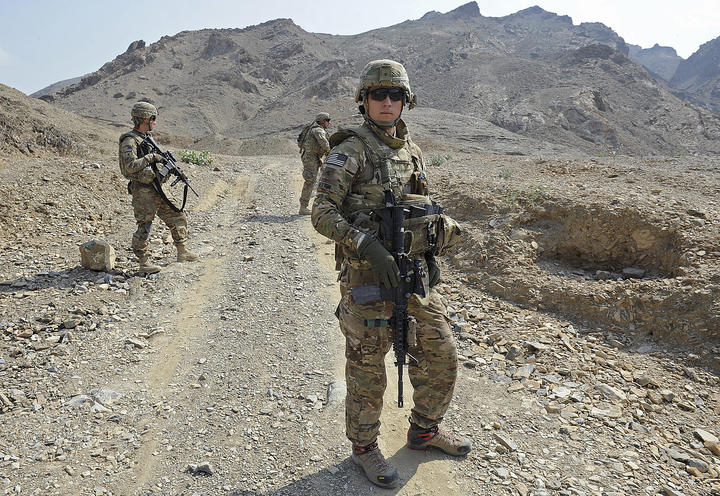 Soldiers from the US Army HHB 3-7 Field Artillery Regiment during a mission in Afghanistan near the Pakistani border in 2011, a decade after the war that cost thousands of lives and hundreds of thousands millions of dollars and left Afghanistan with a corrupt government. and only dim prospects for peace.
Photo: AFP / Tauseef Mustafa

Today, at last, the war that George W. Bush started in retaliation for 9/11 is over. Or rather, it is coming to an end. Of genres.

But in many ways, this war is not over at all.

The opening track of Springsteen’s 2002 album is Lonely day; It speaks of resilience, but it also reflects the darker feelings that were running through the United States at the time; Relentless feelings that 20 years later have left such a terrible legacy on the world.

Hell is brewing, the dark sun is on the rise

This storm will blow little by little

The house is on fire, the viper in the grass

A little revenge and this too will pass

This too shall pass

Springsteen’s use of the modifier – “small” – may have been an attempt to ward off the patriotic rage that grows around him at the full-blown war. But it was a vain hope; There was nothing short of America’s howl of anger at the loss of 2,996 lives and Bush’s response. Osama bin Laden succeeded in provoking a fit of self-destructive anger in the United States. In fact, hell was brewing.

Bush Jr. invaded Afghanistan with nearly 90 percent approval ratings and Iraq, in 2003, with audience ratings once again exceeding 70 percent. In the 2002 midterm elections, the House and Senate won with the highest approval of any president since Dwight Eisenhower.

In Afghanistan, Bush launched what would turn out to be America’s longest war – one we are seeing end in defeat before our very eyes – and the endless, illogical, and frankly unforgivable ill-defined, illogical, and frankly unforgivable “war on terror.” . Estimates for Afghanistan only estimated the loss of life in more than 170,000 people, including 47,000 Afghan civilians. It has cost 2.3 trillion dollars.

Yet amid the national agony of President Joe Biden’s chaotic and awkward retreat, it appears that Springsteen’s prediction that “this too will pass” has proven to be true. The United States seeks to move forward. 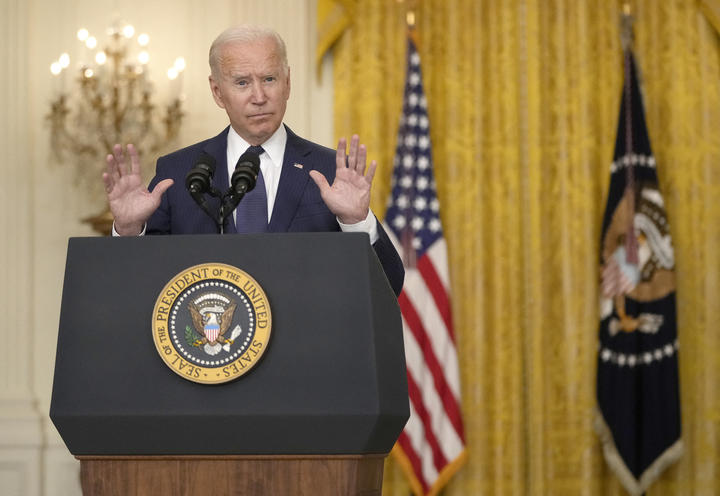 The Post reported last week: “… despite the wall-to-wall news coverage, many Americans see little reason to pay much attention. They long ago concluded that Afghanistan was not their business, nor was it their business. of his country”.

Among a variety of opinions, the Post reported that Anthony Quinn, 67, of San Francisco, said: “It’s hard for me to connect emotionally … it really is on the other side of the world from my world. It doesn’t weigh on me.” Gil Santiago, 21, from Michigan, said: “We should never have been there … It’s like Vietnam; it’s not our fight.”

It’s a big change from the intense support for the war 20 years ago.

To be fair, it’s not all bad. It is reasonable to point out that infant mortality has been cut in half. Millions of girls have reportedly i have an education (although the percentages have been falling since 2011) and, the key goal of the United States, terrorist attacks from that part of the world have dried up.

Bush himself made that point in a rather sick statement expressing sympathy for the Afghan people. But this is far from the “nation-building” project that Bush embarked on nearly two decades ago. 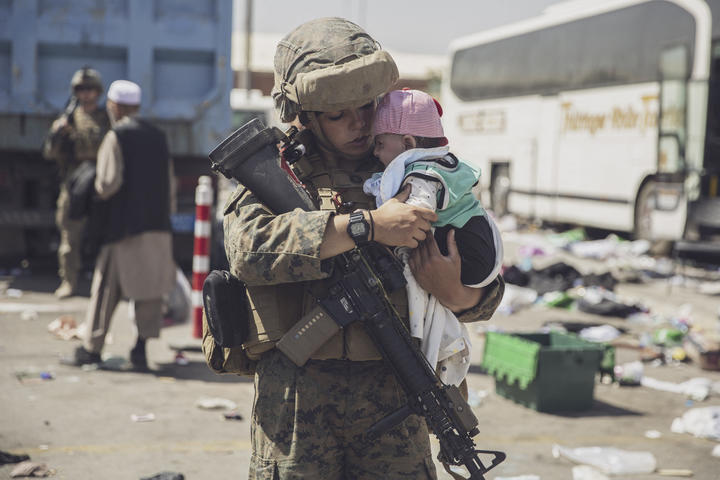 A US Marine carries a baby while his family is processed for evacuation at Hamid Karzai International Airport on August 28.
Photo: AFP

Despite the billions spent on economic development, including wells dug by New Zealand troops in Bamiyan, often referenced, Afghanistan remains a desperately poor country, ranked as one of the most corrupt in the world.

The Taliban’s control of the country may again see opium production cut back, their brutal and undemocratic style of government hardly bodes well for Afghanistan, as long as they are able to maintain power. Who knows how long it will be and how their traditional opponents will react? Instability, oppression and violence are likely to continue for decades to come.

What may be less obvious, especially to those Americans so eager to “get on with it,” is the damage this war has done around the world and in America.

Consider the price New Zealand has paid for America’s “little revenge.” It’s not a complete list, but New Zealand lost 10 soldiers and spent around $ 300 million on the war in Afghanistan.

We tarnished our reputation by arresting dozens of Afghans and turning them over to Americans for torture, contrary to the Geneva Conventions. The late David Beatson broke many stories on that subject in Pandit, while struggling to obtain information from those in charge of the New Zealand Defense Force at the time, notably (now Sir) Jerry Mateparae and (now Mayor) Phil Goff. They have both done well since then, but their reputations also remain tainted.

It is interesting to note that Goff defended New Zealand’s military involvement at the time as a way to push back the Taliban for the sake of Afghanistan’s security and eventually transform the country “from feudalism and anarchy to a modern state of the XXI century”. Those goals don’t seem to matter anymore.

We conducted a now infamous raid which, while deemed ‘justified’, probably left an eight year old girl (and at least seven others who may or may not have been insurgents) were killed and saw NZDF leaders “mislead” “ministers and the public.” We leave behind unexploded ordinances that have killed or injured 17 other civilians. And now, in one last shameful twist, we have left behind people to whom we owe sanctuary. The list goes on. And it continues around the world. 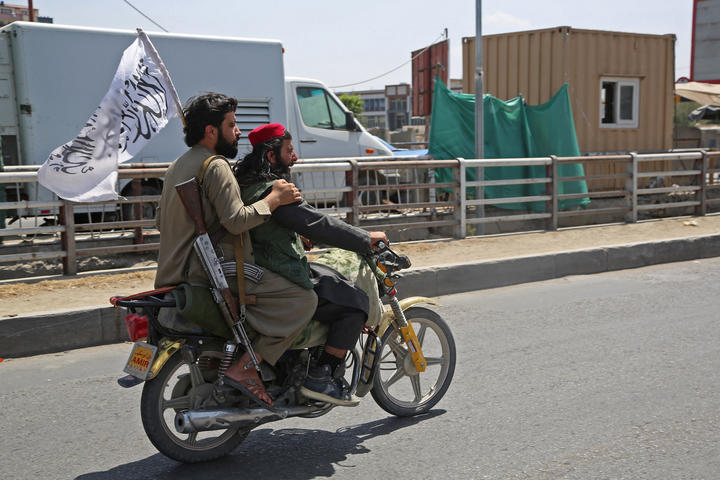 Taliban forces like these fighters shown in Kabul on August 16 moved rapidly through rural and northern Afghanistan and into Kabul, which they took quickly on August 15.
Photo: AFP

But what many Americans don’t understand is the damage their quest for revenge did them. The damage to their own democracy, international reputation and way of life. Remember that out of these wars arose Abu Ghraib and Guantanamo, drone killings, mass surveillance, increased anti-Muslim prejudice, and more.

The insane Trump era had many fathers, but this war must be viewed as one of them. Part of his compelling argument for why America needed to be great again was based on America’s failures and drifting purpose in this unwinnable “war on terror.” And because the United States succumbed to such bluster, other countries have followed suit.

The rise of authoritarian leaders in so many countries is also rooted in this bad adventure.

And while it is obviously not over for Afghanistan, it is not over for the United States either. Economically at least. You can think of the opportunity cost associated with the $ 2.3 trillion the United States has spent in Afghanistan: the roads and bridges that were not repaired or built, the renewable power plants, the schools, the hospitals, the diplomatic efforts in other places, all these things that were not invested. because of this war. But those are just the beginning.

Truman and Johnson raised taxes to pay for their wars. Bush cut taxes and borrowed, passing the bill on to future generations. It is estimated The United States will pay another $ 6 trillion or more in interest on its war debt by 2050. Add another $ 1 to 2 trillion to care for its wounded and the families of the dead.

I mentioned some of those costs when I wrote about the 10th anniversary of the September 11 attacks in 2011. And about how effective these wars were in radicalizing young Muslims, as we saw with the rise of ISIS and other groups. The Taliban have waited patiently, promised a lot, and have now regained power, as they always said they inevitably would; now it’s their turn to decide if they, too, will indulge in “a little revenge.”

As much as President Biden and so many Americans want it, the war in Afghanistan is not really over. The storm has not passed, even after 20 years. The viper remains and this has not happened.

Even when this all started, Springsteen seemed to know that we would get to this day. His poetry of that time captures the truth that there may never be such a thing as “a little revenge.” That retaliation can easily get bigger and darker than original sin. And we all pay the price for fear and anger. The boss finished Lonely day with this verse:

Better ask questions before you shoot

Deception and the bitter fruit of betrayal

That taste on your tongue doesn’t slip away easily

Tragically, the right questions were never asked. The bitter fruit has been to swallow the world and we continue to pay. The taste will not go away for some time yet.

* Tim Watkin is one of the founders of the political news website Pundit, has a long career in journalism and broadcasting, and now leads the Podcast team at RNZ.

–This article originally appeared on Pundit.