Auckland residents have gathered in lockdown responding to a call from social media for clothing and shoes for Afghan refugees. 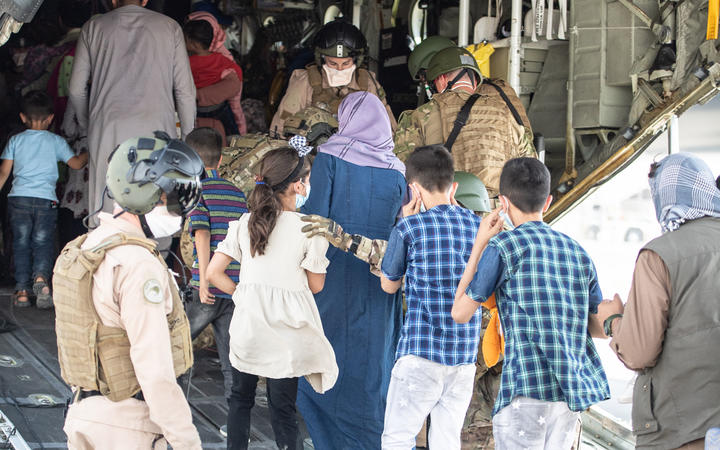 Dozens of refugees have arrived in New Zealand or are due to arrive in the next few days, many of them with only the clothes they are wearing.

Among them were New Zealand citizens, visa holders and close relatives of the Afghan interpreters who assisted the New Zealand Defense Forces.

“It has happened so suddenly that people have not had time to plan, to prepare. It means that they are likely to be separated from their family. They would not have been able to take practically anything with them.

“We know that some people will have literally gotten on the plane with what they are standing on and they would have had no other items.

“It’s going to be an incredible shock and it’s really going to take a lot of care, kindness and compassion on the part of New Zealanders to take care of this group. They are rebuilding their lives in New Zealand. There will be some need for essentials and household items and things. like that. “

And during the weekend, despite being locked up, the Kiwis heeded the call from the Red Cross on social media asking for urgent donations of clothes and shoes for the evacuees who had arrived ‘with minimal clothing’.

“We are incredibly grateful for the generosity of the Kiwis, who within hours of making the call overwhelmed us with the amount of donations we received of clothes and items and stuff. So we have enough for now, but if we need something more , we will put it on our website.

“In the meantime, people can donate through our appeal and that money will be used directly to support families, both here in New Zealand and abroad,” O’Connor said.

Abbas Nazari was 7 years old when he left Afghanistan.

He was one of 400 Tampa refugees rescued from a sinking ship off the Australian coast in 2001.

The Australian government refused to accept them, but New Zealand did.

Twenty years later, he is now a Fulbright Scholar living in Christchurch.

But he said that all those arriving from Afghanistan have a long way to go.

“That would make them so dazed, so confused about what will happen next, but the overwhelming feeling will be one of relief and victory, almost like they have won the lottery.”

He said it will be difficult for them to see things continue to develop in Afghanistan.

“When we were resettled in New Zealand, so relieved, happy and full of joy as if we were given the opportunity of a new life, there is a part of you that almost feels guilty because you know that we survived and left so many others, family and friends , and they will feel exactly the same, knowing that they have left their relatives behind, knowing that they have left their family and their community. “

New Zealand Afghan Association Secretary Khairullah Azizi said they have not yet been able to contact any of the evacuees, but are preparing to provide as much support as possible.

“The fact that there is someone who knows how you think and how you feel is the first type of support we can give you. We are from the same background, we understand your needs.

“We can give them a home away from home potentially just to relax a little bit and forget what they’ve been through.”

He said the last few weeks have been very intense and busy for the Afghan community in New Zealand.

“You’re always thinking of the person you didn’t take instead of the people you did take, so there are a lot of people who are left behind, as a community we care about how they will get here. And when they get here, our community he will be on tiptoe right now, waiting for answers. “

With Auckland set to remain at level 4 for at least another fortnight, O’Connor said it presents challenges for refugees once they are released from MIQ.

“With the recent closure, we had some refugee families that had just arrived in the community. If you can imagine how difficult it is for someone to go to a grocery store right now, if you’ve never done a grocery store in New Zealand before , that’s quite a challenge.

“We have a team of staff and volunteers who support families to do the shopping and pick up medicine or whatever.”