The news that the Alert Level 4 lockdown is spreading surprised few in the regions. 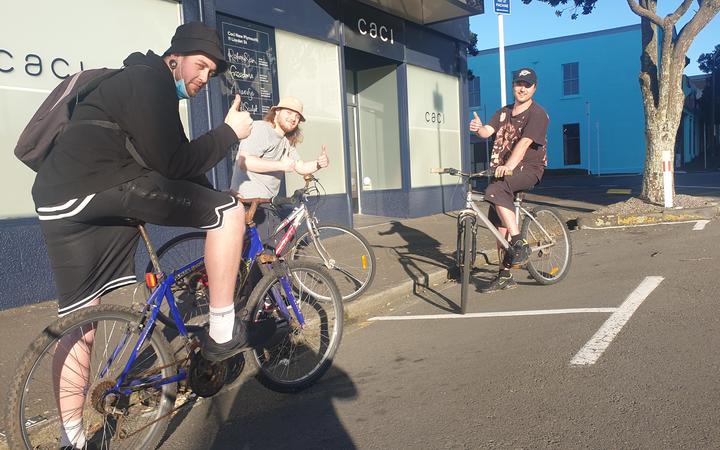 The Nelson and Jesse boys were excited for the lockdown to be extended.
Photo: RNZ / Robin Martin

The announcement was well received in sunny New Plymouth and resident Clare said it was a great decision.

“I think New Zealanders are doing a fabulous job working together for the common good,” he said.

In fact, the Nelson and Jesse boys were excited.

“It’s pretty good, I don’t have to go to work and I can ride my push bike, and the sun comes out too, which is good,” Nelson said.

“I can’t say there is something as stupid as [this lockdown]. We have not had a case of Covid-19 in New Plymouth, I mean God! Just keep going, keep going out of fear, fear, fear. “

But Dunedinista Michelle Sinclair said the decision was the right one.

He has watched from afar as the virus has killed a quarter of a million people in his home country of Mexico, including loved ones.

“Many members of my family have passed away … we are so lucky and so grateful to be here, I think it is amazing how much freedom we have had and that we have been able to live normal lives so well.

“And not the situation of anxiety and trauma that the world lives outside.”

Gisborne Mayor Rehette Stoltz said that while businesses in the region were suffering, there was an agreement that is worth the wait.

“We have great deprivation and a great need for health in our community. So for us, we must protect these people.”

Chief Health Officer Dr Ashley Bloomfield said the small number of sights and cases in Wellington was because those infected were already locked up, in isolation, when contagious.

Meanwhile, in the capital, Jonathan was having a hard time this confinement, and the extension was a blow.

“It sucks. Because we’re crushing right now, it’s kind of a shitty arrangement, you know? We have six people in the house who are working remotely.”

Whereas Emily had no complaints about being locked up for a few more days.

She was having a good lockdown.

“I have like a home gym, I’m saving a little money.”

Most Wellingtons that RNZ spoke with expected Auckland and Wellington to remain at Level 4, while the rest of the country drops levels on Friday.

Canterbury Employers Chamber of Commerce CEO Leeann Watson agreed that staying for now is the right thing to do.

She would like to see the settings changed so that more deals can be opened under alert level 3.

“Sectors like manufacturers, for example, that can operate moderately by having good social distancing, good hygiene practices and making sure to do things differently, but still able to generate some income.”

While there are no confirmed cases on the South Island, the mainland has 120 self-isolated contacts at home.

Queenstown Mayor Jim Boult said there were several in his district and he was happy with the extension.

“We are now going through a period where, if we have cases, it will become apparent in the next few days.

“By the end of the week we should be starting to get over that pothole, and if the South Island is to the point where we have no cases, I think that’s the time we should think about opening the door again.”

The government will announce alert levels for the entire country except Auckland on Friday.