Here we go again! Teddy bears in the windows, walks around the neighborhood in masks, and a constant diet of screen time. In Level 4 2020, it was about King tiger Y Schitt’s cove. Now, we are all here to Ted lasso Y The white lotus. 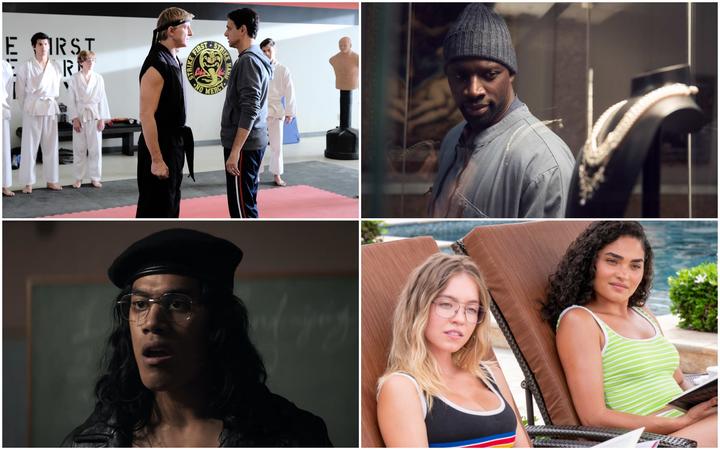 If anything, there is plenty to choose from on the multiple streaming platforms available to New Zealand viewers. If you’re interested in something to get you through the Level 4 blues, here are 10 picks for what to see at the bull run:

For more information on Aotearoa’s recent past:

It may seem like it was a million years ago, but it premiered this week, so it’s the perfect time to check out this new six-part series based on the true story of the Polynesian Panthers. It is a courageous and sincere attempt to assimilate the racist legacy of Aotearoa’s story wrapped in a compulsively observable story about the coming of age of a young man. A solid reminder of how far New Zealand has come and how far it has yet to go.

If you want to see beautiful people do ugly things:

Is this the “hot” show of 2021 like Tiger King was last year? Possibly, but it’s also a delightfully quirky black comic series that’s set to wow viewers. The story of several wealthy families on vacation at a Hawaii resort and a mysterious death that unfolds slowly over six episodes, takes several twists that make it feel a little more Twin Peaks than Fantasy Island, and features surprising performances, a haunting soundtrack and beautiful scenery, and oh, a lot of it refers to rich people.

If you just want to laugh and binge:

One of the pleasant surprises in our house is how much Mr. 17 enjoys watching a sitcom that began almost 50 years ago, and how much fun it remains today. All 11 series and 256 episodes of the classic series air on Disney +, from the early years to the epic final episode (still the most-watched television episode in history, believe it or not). Often hilarious, sometimes heartbreaking, there’s a reason this lingers on, and it’s a binge watch long enough to get you through just about any lockdown.

If you are nostalgic for when the children left the house to go to school:

Somewhat overlooked, this bite-sized comedy about an ordinary Kiwi high school teachers is for fans of What we do in the shadows Y Paranormal Wellington. It features familiar faces like Jackie van Beek and Jonny Brugh and a dry, deadpan, quintessential New Zealand sense of humor that will lighten your mood in two series of 15-minute short episodes.

If you want to appreciate a master artist:

A Beatle and a fan, alone in a room talking about music. If you’re of a certain age or a staunch Beatlemaniac, this documentary series with music producer Rick Rubin and legendary Paul McCartney looking back on his career is a must-see. It’s not a flashy celebration of the Beatles, but rather a focused and conversational look at how great music is made that delves into geek song heaven, and it’s absolutely riveting.

If you want to pretend that you are a glamorous international criminal:

For fans of Sherlock or The blacklist, this French import is a modern retelling of the famous “gentleman thief” Arsène Lupine, starring the excellent Omar Sy as a kind-hearted con man who seeks to avenge his father’s death with a dazzling series of twisted betrayals and disguises. Available in original French and with English dubbing, but French is the way to go for the full experience.

If you are looking for a hero:

Yes, there are about a million movies and TV shows based on superheroes, but quietly, the first and the greatest of all has returned in an incredible new series that has just finished its first season. This is a game changer by being the story of a 40-something Superman who is married to Lois Lane and has two teenage children, one of whom is developing powers as the good father. Tyler Hoechlin nails the central appeal of the Man of Steel with the best performance as a character since the late Christopher Reeve, and this show balances a lot of heart with excellent heroic action.

If, instead, you want to think ahead:

If you’re fed up with 2021 and want to dive into a complex and inventive possible future, you can’t go wrong with The expansion ‘s five seasons to date, based on a series of science fiction novels about a future in which man has spread out to colonize Mars and the stars, and the resulting conflicts. Filled with space politics and strange alien threats, it also features excellent Samoa New Zealand actress Frankie Adams as an incredible Martian commando. If you liked things like Star Trek: The Next Generation or the remake of Battlestar galactica, this is the rocket you want to ride next.

If you want to see kung fu kicks and fill a longing for nostalgia at the same time:

Look, Ralph Macchio’s The Karate Kid was a lot of fun in 1984, but no one was dying to pick up the story 35 years later with Macchio’s karate champion Daniel, now a middle-aged car salesman, right? But it turns out that Cobra Kai is far better than 90 percent of unnecessary remakes and reboots, mainly because the focus is on Daniel’s defeated thug nemesis Johnny Lawrence, who is an unexpected and badass hero. Deliciously cheesy fun with lots of kung-fu action and one that adults and kids alike can enjoy. There are three series and a fourth on the way.

If you just want to hang out with a decent person who is outside of your bubble:

Jason Sudeikis is one of those “hey, I know that guy” faces that appears in movies like Horrible Bosses, but he has found his turn to star as the cool, upbeat American who ends up coaching a British football club in this charming series. . Everyone likes an underdog, and this show offers you someone who is fundamentally decent but not a fool to support. A special bonus for its latest episode is a Christmas episode that will be released in mid-August, perfectly timed for a kiwi in the dead of winter.